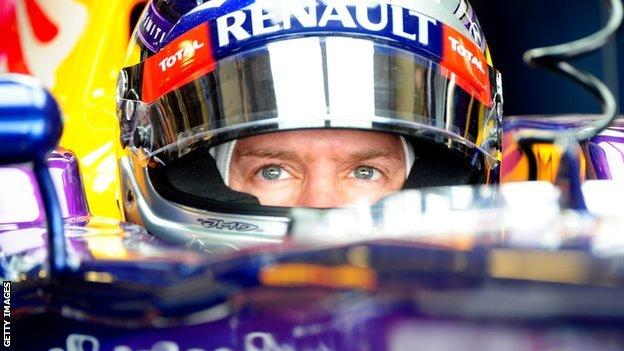 The newly-crowned world champion was 0.155 seconds quicker than the Australian with Mercedes driver Lewis Hamilton third from Lotus's Kimi Raikkonen.

Hamilton's team-mate Nico Rosberg was fifth from the McLarens of Sergio Perez and Jenson Button.

Lotus's Romain Grosjean, the closest challenger to the Red Bulls in the last few races, had a brake problem on his qualifying-simulation lap and ended up 12th.

The Frenchman also had to abandon his race-simulation run with what appeared to be the same issue.

"Lotus is exceptionally quick around here," said Vettel. "Especially come Sunday they are able to pull off very strong pace later in the stints so we need to keep an eye on them, but Mercedes [could be quick] on one lap tomorrow."

The Red Bulls looked impressively quick - Vettel was 0.355secs ahead of Hamilton, who was hundredths ahead of Raikkonen and Rosberg on their low-fuel, qualifying simulation runs on the faster 'soft' tyre.

Vettel was then about a second a lap faster than anyone else on the same tyre with a full fuel load, and he and Webber were a similar margin ahead of the field on the 'medium' tyre with a second-stint race fuel load.

Lotus look to be Red Bull's closest rivals in race trim, although Hamilton is likely to be their strongest threat in qualifying on Saturday.

Lotus reserve driver Davide Valsecchi, in his role as BBC 5 live analyst, said: "Vettel and Webber will be not easy to beat in qualifying, Hamilton is good in qualifying but the Lotuses of Grosjean and Raikkonen can fight for the second row.

"In the race, maybe Raikkonen can fight for the victory."

Ferrari appear to be struggling badly on a track that exposes their car's poor traction.

Alonso was 0.8secs off the pace on low fuel and almost two seconds a lap slower than the Red Bulls on a race run.

Alonso said Ferrari were facing a tough weekend. "We are eighth and 10th, but do not have much room for improvement."

Raikkonen and Grosjean were driving different configuration cars in the first session, with the Frenchman in the long wheelbase car that has been used for the last three races and Raikkonen in the short-wheelbase version which has done most of the season.

Lotus were the centre of paddock speculation on Thursday after Raikkonen failed to turn up for the media day.

He had been upset by a radio exchange during the Indian Grand Prix when the team's trackside operations director Alan Permane swore at him when asking him to let Grosjean by in the closing laps.

Raikkonen, who swore back at Permane, needed some calming words from team boss Eric Boullier before he would get on a plane and fly to Abu Dhabi.

He turned up at the track only an hour or so before the first practice session.