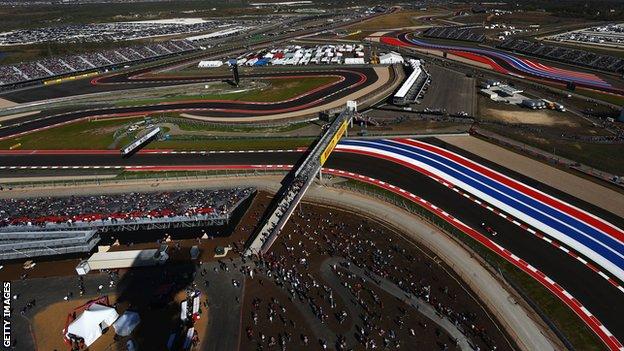 Austin's Circuit of the Americas is a great example of a new grand prix track gone right.

It has a number of stand-out features that combine to make it arguably the best of the new tracks that have been built by Formula 1's in-house architect, Hermann Tilke.

The first is the incredibly steep rise into Turn One. It's very difficult to get the braking right there because the car slows down so much as a result of the elevation change.

It's easy for a driver to brake too late but it doesn't matter too much if he does because there is plenty of room to get the speed out of the car and still get around the corner, and the next section is downhill so the car can pick the speed back up again relatively easily.

The next section is the best part of the track. Turns Three to Nine are effectively one long set of corners like the Esses at Suzuka or the Becketts section at Silverstone. The drivers go in fast and slow down as they go, and every corner links into the next.

The car has to be balanced just right for that section. A driver does not want understeer to wash the front off line, but at the same time he won't want a nervous rear end either.

It's not an easy compromise to find because slowing down for a high-speed corner, the rear tends to get nervous. So the tendency is to take off front wing to stop that and then the car will understeer in the initial corners.

The one downside of that section is it is very difficult to follow another car through there because its turbulence will rob the car behind of downforce, and the detection point for the DRS (drag reduction system) overtaking zone is right after that set of corners, on the run to the hairpin at Turn 11.

What that means is drivers need to be clever to overtake - they need to hang back and catch the car in front as they go through that section rather than be right on the tail of the car in front at the start of it.

Austin follows the trend on modern circuits for a long, long straight, and I have to say I think F1 is kind of missing the point with these track designs.

The long straights are there to make overtaking even vaguely possible. But surely it would be better to fix the problems with the cars that stop them overtaking?

Mistake magnet at the last

Like so many of the newer generation of tracks, set-up is a compromise in Austin. There is the fast section at the start of the lap, then the long straight, and then a fiddly, point-and-squirt complex section before a long, four-apex left-hander at Turn 16, 17, 18.

Last year, the corner that caused drivers most trouble was one of the ones that looked most innocuous - Turn 19.

On the circuit map, it does not look much, but it is downhill, it looks very open but it has a bit of negative camber and lots of drivers ran wide there. They were tending to get sucked in, thinking they could go faster than they actually could.

A contributing factor was the grip level was very low last year because the asphalt was so new.

Quite often, the grip has actually reduced second time around because asphalt is normally quite grippy when it is new but then it settles down a bit. There has been a lot of racing on the track since the grand prix. It will be interesting to see whether that has changed over the past 12 months.

Formula 1 has been looking for a place to set down permanent roots in America for decades, and the Circuit of the Americas just outside Austin, Texas, might just be it.

It seemed an incongruous match at first. A city known for its non-conformist attitudes, the slogan of which is "Keep Austin Weird", in the far south of a state about as far from road-racing's core American audience on the east and west coasts as it is possible to be.

But the inaugural race in 2012 worked a treat.

Austin, it turns out, isn't "weird" in comparison to the cultural mix of Europe, but in the sense of an island of liberal attitudes in a conservative state.

It's a vibrant, atmospheric city, throbbing with live music and crammed with good restaurants and fun nightlife. Not unlike another F1 favourite - Montreal.

And the track that has been built just to the south is, as far as modern F1 circuits go, wonderful, with an interesting mix of corners and a genuinely challenging series of fast sweepers in the first part of the lap.

The owners have been cramming it with events year-round to keep it financially viable, and everyone has their fingers crossed for a long and fruitful association.

Pirelli has decided to take the medium and hard tyres so the quirkiness of the soft tyre that has been used for the last two races in India and Abu Dhabi has been taken away.

That might seem a surprising choice in some ways because the track was very light on tyres in 2012 and it was a one-stop race on the mediums and hards.

But Pirelli will be worried about the high lateral loads through the fast Esses section in the first sector, which would probably be too much for the soft tyre - just as the high-speed corners in India were.

Out of the tyre choices Pirelli has, medium and hard is right for Texas, but it does mean there are unlikely to be any exciting tyre strategies popping up.

Last year, Sebastian Vettel appeared to be in a class of his own throughout practice and qualifying but ended up being beaten by Lewis Hamilton's McLaren in a very close race that was decided when Vettel tripped up on a backmarker.

Austin is a track where you need a good car, but the driver can also contribute to the lap time. So it is very hard to imagine anyone but Vettel winning - and if he does, he will break the record for consecutive wins in one season.