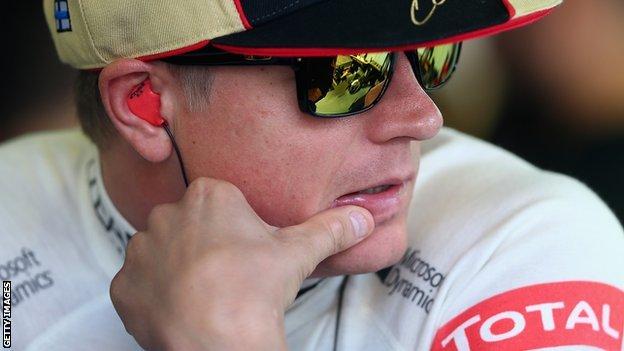 Raikkonen, 34, who says he has not been paid by Lotus all year, suffered a flare-up of the long-term problem earlier this season.

The Finn will rejoin Ferrari, with whom he won the 2007 world championship, for 2014.

Lotus said they will announce a replacement driver "in due course".

"The most important thing right now is to sort out the back problem. Then Kimi can go into next season in the best of shape."

He aggravated an old injury at the Singapore Grand Prix and it was bothering him throughout October, but what was probably bothering him more was the fact Lotus hadn't paid him. There were question marks about whether he'd take part in the last two races. It's a bit of a blow for Lotus because they're in a tight fight in the Constructors Championship.

A further statement from Raikkonen's management team posted on the driver's official website confirmed the decision to operate was made to avoid any long-term problems.

"A recurrence of this problem has forced him to have surgery now to help prevent ongoing problems in the future," the statement said.

"Kimi and his management are saddened that he will not be able to complete the 2013 season with Lotus F1 Team where he was fighting for third position in the drivers' championship."

Boullier said Raikkonen called on Saturday night to inform him - the latest twist in the driver's increasingly strained relationship with his team.

Raikkonen was involved in a heated radio exchange with the Lotus pit wall during the recent Indian Grand Prix after failing to move aside for team-mate Romain Grosjean, and was then late arriving to last weekend's race in Abu Dhabi amid the ongoing pay dispute with his employers.

He was also not paid in 2012 until the end of the season.

With the penultimate race of the season in Austin just a week away, Lotus will have to move fast for a replacement driver.

Sauber's Nico Hulkenberg and Williams's Pastor Maldonado head the list of drivers vying to replace Raikkonen in 2014, but it seems unlikely either could be released from their current contracts, leaving Lotus reserve driver Davide Valsecchi as the man likely to step in.