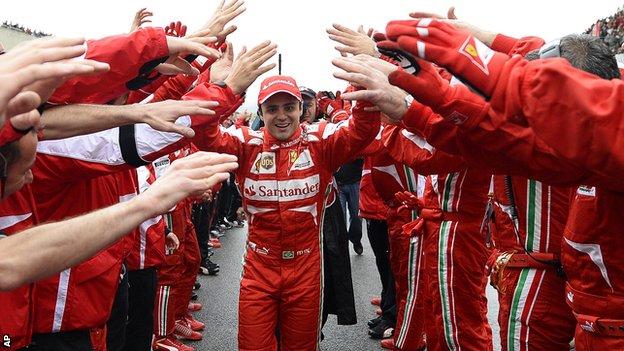 Williams say signing Brazilian Felipe Massa from Ferrari is proof they are determined to return to winning ways after years of declining form.

Williams dominated Formula 1 for much of the 1980s and '90s but have scored only one point this year.

Deputy team principal Claire Williams said: "We've done a lot of work this year in order to turn this team around and we want to tell the world that.

"Williams are not satisfied with coming ninth in the championship."

She said Massa's decision to join the team alongside Finn Valtteri Bottas was the latest in a series of moves aimed at revitalising the former world champions.

They have already signed a deal to switch from Renault to Mercedes engines, taken on a new technical director in Pat Symonds, who has won world titles with Michael Schumacher and Fernando Alonso at Benetton/Renault, and further changes in engineering staff are on the way.

Williams said: "We've made some very clear decisions this year from announcing the Mercedes partnership to bringing in a new technical director in Pat Symonds, and this [signing Massa] is another piece of our jigsaw to tell the world that Williams is determined to come back and determined to fight for world championships again."

Williams said persuading Massa, a 32-year-old 11-time grand prix winner, to join "wasn't actually too hard a sell - it's so clear to see this team is made up of fighters and people who want to win F1 races".

Williams have been on a downward trend in recent years, halted only by an upturn in form in 2012, when they won their first race since 2004 thanks to Pastor Maldonado at the Spanish Grand Prix.

Massa has been signed as replacement for the Venezuelan, who is now likely to drive for Lotus but also has options at Force India and Sauber.

"Pastor has done a great job for Williams these three seasons and it's a shame he's leaving us, but he wants to go on and find a new challenge," said Williams, who described Bottas as "a real talent" and said partnering Massa with him is "really exciting".

Williams are in the middle of a recruitment drive aimed at strengthening the team. One of the new signings will be Massa's Ferrari race engineer Rob Smedley, who is joining ahead of 2014 in a more senior role overseeing race engineering.

The story of Felipe Massa

Smedley has become famous for his down-to-earth radio communication with Massa in the past few years, including the notorious "Fernando [Alonso] is faster than you" message when Ferrari imposed team orders on their drivers at the 2010 German Grand Prix.

Asked whether Smedley had signed, Claire Williams said: "We're working very hard to address the problems we have in-house. We have some great talent in Williams but we need to make sure we have all the talent we need to perform right at the top.

"So I'm hoping that before the end of the season or maybe slightly after we'll be making some more announcements in a similar vein to this one [Massa]. Whether that involves a certain engineer or other engineers I can't tell you."

She emphasised that any deal with Smedley was independent of Massa.

"They don't come as a package," she said. "They come separately. They are very much their own people.

"So if Rob Smedley was to join our team, it has to be on his terms, and he has to be given a role he wants to do and that may or may not be Felipe's race engineer.

"Felipe is grown-up enough to join a team without bringing his race engineer with him."