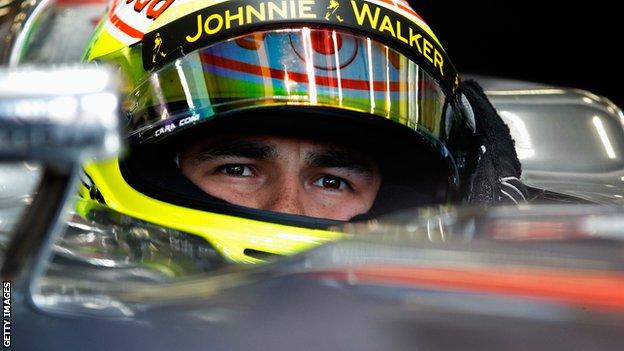 McLaren driver Sergio Perez has confirmed he is to leave the team at the end of this season.

Perez, 23, who only joined McLaren this year, informed his fans of the news via an open letter on his Twitter account.

The Mexican is set to be replaced by McLaren development driver Kevin Magnussen.

"I have always given the best of me for the team and still despite this I could not achieve what I aimed for in this historical team," said Perez.

"I am committed to deliver very good results in these last two races, especially in Austin. I would like to wish the team the very best in the future."

McLaren are poised for their worst season since 1980, with two fifth places - one for Perez and one for team-mate Jenson Button - as their best results.

Perez, who joined McLaren for this season as a replacement for Lewis Hamilton, has been linked with a possible move to Force India, while there are also potential vacancies at Lotus and his former team Sauber for next season.

"I will always be a fan of McLaren. In the meanwhile I will be looking at my future to ensure my position in the best possible package to fight for wins," he said.

Whitmarsh said: "Checo [Perez] has made many friends during his time at McLaren, and together as a team we intend to do our utmost to help him finish his year with us with two good results, especially here in Austin, where he has so many fans.

"We wish him well for the future, and are sure that he will have many successes ahead of him.

"As regards our driver line-up for next year, no 2014 deal has yet been signed with any driver except Jenson, and we therefore have nothing further to announce at this time.

"As and when that situation progresses, we will make a further announcement accordingly."

Earlier on Wednesday, Perez said McLaren needed to be better organised and more humble if they were to return to the top.

"This is a great team. If I'm here next year there should be more organisation and many times more humility when facing reality," he told the EFE agency.

"McLaren has struggled to see where we were instead of carrying on thinking we had a car to win races."