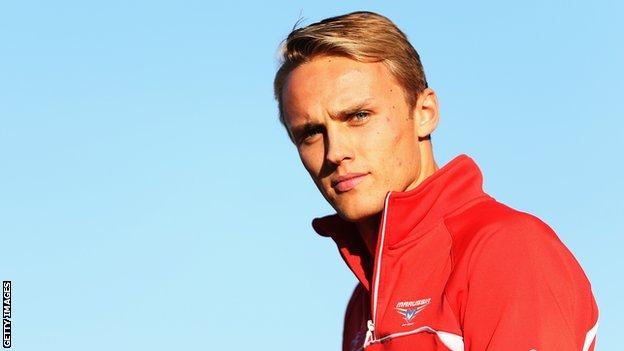 British driver Max Chilton is close to securing a deal to remain in Formula 1 next season, says his father Grahame.

The 22-year-old from Reigate is in his rookie season with Marussia.

"We are in advanced negotiations with various teams and it is looking good," Grahame Chilton told BBC Surrey.

"Max and Marussia are keen to come to an agreement, so hopefully we will have some announcements over the next few weeks. We really expect him to be on the grid next year."

"You have to find the good guys and try to do business with them. I have found it interesting representing Max's interests but it is just another part of business."

Chilton made his debut for Marussia at this year's Australian Grand Prix following a spell as reserve driver last year.

The former Sussex schoolboy has not scored any points in the Drivers' Championship but he has finished every race this season, with his highest finish coming in Monaco when he came 14th.

The Banbury-based outfit have already agreed a deal for Jules Bianchi, Chilton's team-mate, to drive for the team next year.

Chilton said in June that he wanted to remain with Marussia for the 2014 campaign.

"To really prove your mettle in Formula 1 you need to have the right machinery," Grahame continued.

"Marussia, with their budget, are doing an exemplary job. They have a much smaller budget than the Caterham and are currently beating them in the Constructors' Championship.

"Max is in with a very highly-fancied team-mate in Jules Bianchi and he has made a good account of himself.

"He had a blip in the middle of the year but I'm not sure that was all Max. Since then he has been quicker and beaten Jules on many occasions.

"I'm sure he would love to be in a quicker car but I have a feeling Marussia will be a much quicker car next year."