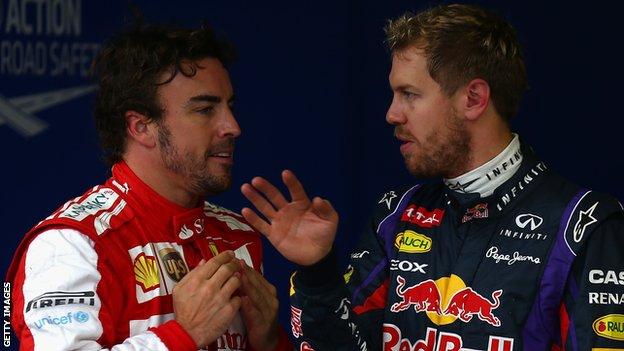 Formula 1 drivers have been allocated the race numbers they will use for the rest of their careers.

Governing body the FIA has published the 2014 entry list, revealing the numbers chosen by the drivers.

Under a new rule, drivers picked their preferred choices. If there was a clash, priority went to the driver placed higher in the 2013 championship.

As world champion, Sebastian Vettel has exercised his right to use one in 2014 and has picked five for his career.

Formula 1 by the numbers

Alonso, who was runner-up to Vettel in 2013, has chosen 14 because he used it during his teenage years in karting and he considers it lucky.

The famously unemotional Raikkonen said he picked seven because "it's the number I already had last year and I saw no reason to change it".

Button asked for 22 because it was the number on his Brawn car when he won his sole world title in 2009.

The rule was introduced so drivers could market their image with one number, as happens in grand prix motorcycle racing and the US-based Nascar stock car series.

Previously, numbers were allocated to teams on the basis of their positions in the preceding year's constructors' championship, with the teams deciding which driver carried which of their two numbers.

After the entry list was published, Marussia officially announced that Englishman Max Chilton will retain his seat for a second season. He is named on the entry list, but without an allocated number.

Caterham have not yet chosen their drivers and their slots are to be confirmed.

The full 2014 F1 entry list is as follows, with the drivers' race number listed first:

*Vettel has chosen to carry number one, as is his right as world champion, but has chosen 5 for the duration of his career