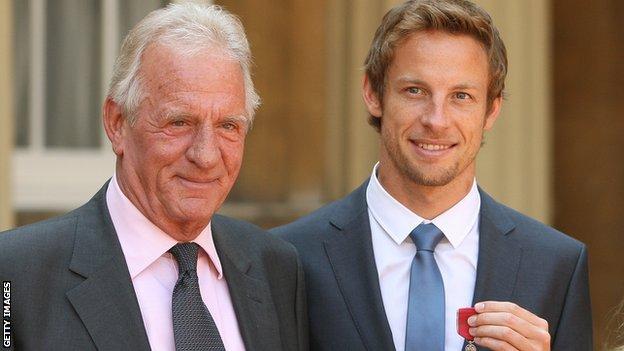 John Button was found dead at his home on the French Riviera by a friend on Sunday.

He was a strong influence on his son's career, which includes winning the 2009 World Championship.

A statement released by the McLaren driver's agent read: "It is with great sadness I can confirm John has passed away."

"Jenson Button's father John had been a permanent fixture in Formula 1 since his son's debut 14 years ago.

"The perfect 'racing dad' - he was there at his son's wishes for support and advice if required, but never interfered or got in the way.

"A very decent rallycross driver in his time, John Button was a bon viveur and heartily jovial character. Rarely very far from a glass of red wine, he was popular throughout the sport.

"'Papa Smurf', as he was known, was the source of many a great story from behind the scenes. The paddock will be a duller place without him."

It added that "initial signs indicate a suspected heart attack".

The statement continued: "John's children Jenson, Natasha, Samantha and Tanya and the rest of the family are clearly devastated and ask for their privacy to be respected during this extremely difficult time."

Former McLaren team-mate Lewis Hamilton ‏led the tributes to the 2009 champion's father, tweeting: "Deeply saddened by the passing of John Button. I'm so sorry @jensonbutton John was such a great man and will be missed by so many. God bless."

McLaren team principal Martin Whitmarsh said: "Speaking on behalf of all at McLaren Mercedes, I want to say how very sad I was to hear the news of John's passing.

"In my long Formula 1 career, I've encountered many drivers' fathers, but I think it's safe to say that John was perhaps more devoted to his son than any of them.

"Ever since Jenson was a boy, racing go-karts, his dad has been at his side, helping him, supporting him, finding the money for the next race.

"He was not only a great dad, but also a lovely man, and he'll be enormously missed by Jenson, of course, by all at McLaren, and indeed by the Formula 1 community at large."

Button's new team-mate Kevin Magnussen wrote on Twitter: "I'm very, very sorry for my team-mate, Jenson Button. His dad was a really great guy who will be missed by all in F1."

Two-time world champion Fernando Alonso tweeted: "My condolences to all the Button family, especially to Jenson Button. Very sad news. John.... a great man, a friend, we will miss him."

British driver Max Chilton tweeted: "So sad and shocked to hear the sad passing of John Button. One of the greatest characters in the paddock & will miss him dearly."