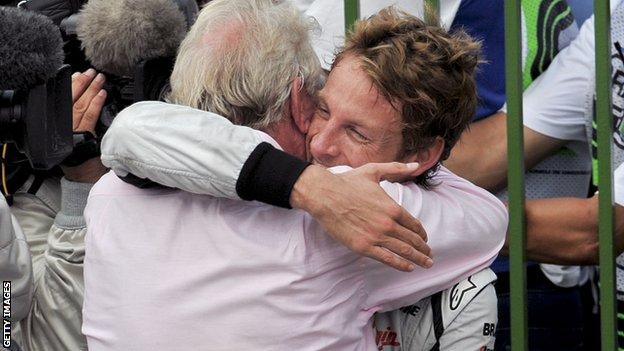 Jenson Button has described his late father as "such a big part" of his life as he thanked followers on Twitter for their support.

The 70-year-old was described as missing only one of his grands prix.

"Papa you cannot believe how very proud I feel to be able to call you my Dad," Button tweeted.

"Thank you all for your lovely messages about my Dad, it's so nice to see he touched so many people."

He added: "I love you Papa Smurf, you'll forever be in my heart. Rest in Peace with the angels. Your son XXXX."

A statement previously issued by the McLaren driver's agent said: "John's children Jenson, Natasha, Samantha and Tanya and the rest of the family are clearly devastated and ask for their privacy to be respected during this extremely difficult time."

He said: "Jenson will miss him terribly but a racing driver's mentality is a peculiar one.

"Look at all the death we had [in my era], and yet we still raced.

"The human being is an amazing animal."

Button will resume testing with McLaren later this month in Jerez ahead of the 2014 Formula One season, which starts in Australia in March.