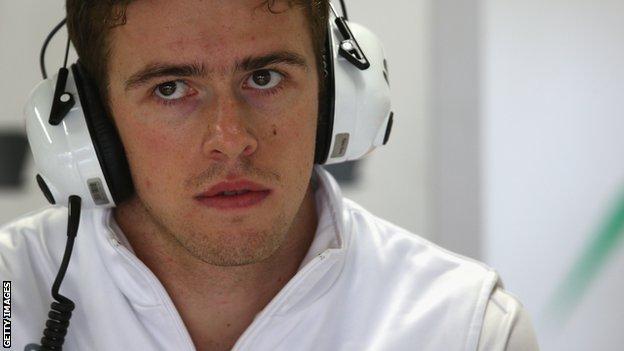 Paul Di Resta will drive in the German Touring Car Championship this season after rejoining Mercedes.

The Briton won the title in 2010 before moving to Formula 1, but lost his seat at Force India for 2014 to Mexican driver Sergio Perez, who had been discarded by McLaren.

With no other F1 seats available, the 27-year-old has opted to move on.

"Mercedes-Benz has given me a car I can use to fight for the title," he said. "I realise that it will not be easy."

Di Resta drove in the German series for three seasons from 2007, earning six wins, six pole positions and seven fastest laps in his 42 races before moving to F1, where he scored 121 points in 58 grands prix for Force India.

He will join another British former DTM (Deutsche Tourenwagen Meisterschaft) champion - 2005 winner Gary Paffett - at Mercedes and will be one of seven former title winners to have confirmed their participation in the series.

Di Resta will return to the track during testing in Portimao on Tuesday before the DTM season opener in Hockenheim on 3 and 4 May.

"It feels really good to be back in the DTM and to see so many familiar faces again," Di Resta said.

"Much has changed since my last DTM race in Shanghai in 2010, with new cars, a new set of rules and a third manufacturer, but what has not changed is my enormous appetite for success.

"My competitors already have two years of experience with the new generation of vehicles but, starting with today's first test, I'll be going flat out in order to be capable of winning at the Hockenheim season opener in early May."