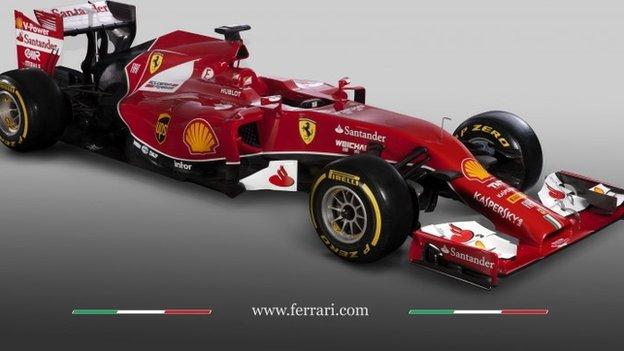 Ferrari have revealed the car they hope will end a six-year championship drought in 2014.

The new F14-T features a dramatically shaped front, with bodywork swooping down to a much wider nose tip than has been seen on the other new cars so far.

The car will be driven by former world champions Fernando Alonso and Kimi Raikkonen, arguably the strongest driver line-up on the grid.

It is Ferrari's response to the biggest set of rule changes in a generation.

Formula 1 is replacing the 2.4-litre V8s of the last eight years with new 1.6-litre V6 turbos, which use extensive energy recovery systems.

There are also a series of changes to the chassis rules, which have led to among other things to unusual-looking noses.

After the new Williams and McLaren were likened to anteaters, and the twin-pronged Lotus to tusks, Ferrari have gone a different route.

The nose cascades down from the high chassis top into a flatter front nose, while others have chosen a much narrower design.

All the shapes are aimed at getting as much air under the car as possible for aerodynamic reasons while satisfying the requirement for a lower nose.

Ferrari are under extreme pressure to win the championship after Alonso finished second to Red Bull's Sebastian Vettel three times in the last four years, missing out by the narrowest of margins in both 2010 and 2012.

Ferrari team principal Stefano Domenicali said: "The technical challenge is the biggest we have seen in the last 10 years in F1.

"The season will be very, very long, so it is important to start with a very reliable car and then keep having the development on the aerodynamic side that was not there last year.

"I expect the first days of testing to be very challenging, and we must avoid falling under the big pressure we have. We need to stay very focused on the job."

Alonso likened his experience of missing out on the title in his first four seasons with Ferrari to that of Michael Schumacher, who finally won his first championship with the Italian team in 2000 in his fifth season with them.

"Obviously in the last four years we had some opportunities, especially in 2010, 2012, we were very, very close to winning the championship. So this year we'll try again and hopefully this time will be the good one."

The two-time world champion also believes that is partnership with Raikkonen will be a formidable one.

He added: "I think [with] Kimi and me as a team we should be quite strong because we've had some success in the past in our Formula 1 career."

Raikkonen is the last driver to win the title for Ferrari, back in 2007. He was paid off at the end of 2009 to make way for Alonso but the team brought him back for 2014 after tiring of former driver Felipe Massa's inconsistency.

He said: "It is nice to come back to Ferrari, the place I won my championship. The aim is the same. We want to do the best I can, try to win races and championships."

Ferrari technical director James Allison, who like Raikkonen joins from Lotus this year, said he believed reliability would be "absolutely fundamental" in this year's world championship, and more important than aerodynamic or engine performance.

He added that recent investment in technology at Ferrari should leave the team in a good position "to prosper" in the next few years, as long as the team of engineers "worked well".