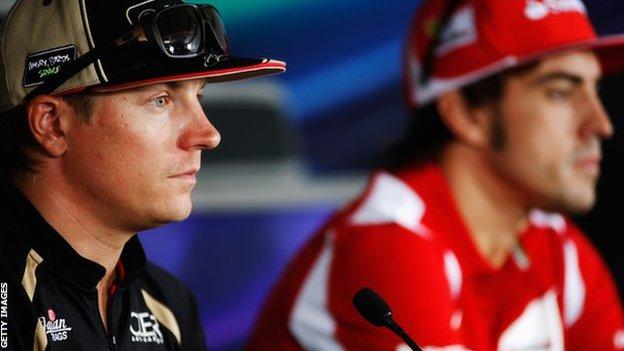 Ferrari's Fernando Alonso and Kimi Raikkonen say they will race each other flat out in 2014 but do not expect any friction in the team.

Both revealed they are targeting the title, as Raikkonen re-joins a team Alonso has led for four years.

The Finn said: "There is a lot of talk outside about problems, but inside the team we have a very good feeling."

Alonso added: "We will follow wherever the team priorities lie and try to do our best to win both championships."

The Spaniard, world champion with Renault in 2005 and 2006, has finished second for Ferrari to Red Bull's Sebastian Vettel in three of the last four years.

His relationship with Ferrari grew tense in 2013 as they fell out of contention following a bright start.

Alonso was generally given priority over his former team-mate Felipe Massa in their four years together.

But he and Raikkonen - Ferrari's last world champion in 2007 - said they would compete hard with each other.

There was no mistaking the message from Fernando Alonso and Kimi Raikkonen's first news conference as Ferrari team-mates.

Both men - two of Formula 1's titans, who together form the strongest driver line-up on the grid - were polite, even smiling at each other, but neither left any room for doubt. They are there to beat each other.

Managing that will be the biggest test of the career of Ferrari team principal Stefano Domenicali - and possibly even their much-longer-in-the-tooth president Luca Di Montezemolo.

Alonso's relationship with both was tested last season as the frustrations of falling short for a fourth successive year rose to the surface.

Signing Raikkonen was in some ways a response to this - a guarantee that they would have a world champion even if Alonso left, as looked possible at one stage last summer.

Now, the Alonso-Ferrari marriage has been patched up and both seem determined to make it work. But can it survive the return of the taciturn Raikkonen?

The battle on the track is eagerly awaited and will be intense in the extreme; that off it just the same.

This is just the first page of what will undoubtedly be one of the stories of 2014.

Asked in a news conference, accompanying the launch of Ferrari's 2014 F1 car on Saturday, whether one would let the other past if he was faster in any given race, Raikkonen said: "I don't think there is any way of telling things right now because every situation is different but we know what we have to do.

"We have said before we are going to race against each other like every year.

"It doesn't matter who is your team-mate. But for sure we have respect for each other and obviously we both try to come out on top. We know what the team expects from us and I think time will tell what happens."

Alonso added: "There is not any way of preparing anything or any way to answer the question straightaway but the best way to bring back to Ferrari some of the success it has had in the past is to race each other at 100% every race and try to always bring back the points for the team and for ourselves.

The 32-year-old Spaniard said he was hopeful Ferrari would have a car that was able to compete at the front.

"We have to be optimistic," Alonso said. "There is no sign to be pessimistic. We're in a changeable time now and we have many things coming in F1 with a big regulations change, but I think we are quite well prepared for that.

"The team has been working for a good time on the new car. We have the technology and the people and the facilities to create and to be ready to challenge in that new F1.

"So that is my main reason to be optimistic. We are in Ferrari; we are in a team that is only competing to win.

"Finishing second is like a disaster because everyone is expecting a lot and these expectations and motivation everyone has makes me very optimistic, I am sure everyone in the team will do it 100% to do it right. We are a team and we need to deliver."

The new F14-T car has an unconventional swooping nose design which has drawn mixed reviews, but the drivers said its looks were not important.

Alonso said: "I am happy. The aesthetics are not really important. We will not know until [the start of the season in] Australia if it is right or wrong. If the car is like this it is because the designers found it better like this, so I'm happy."