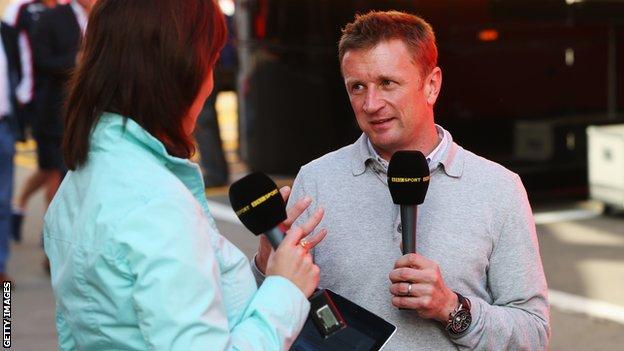 Three-time Le Mans 24-hours winner Allan McNish will be part of the BBC F1 team for the forthcoming 2014 season.

McNish will co-commentate for Radio 5 live at 15 races and provide expert analyst across TV, radio and online.

The Scot, who drove for Toyota in the 2002 F1 season, made his debut in the BBC commentary box last year.

"We're delighted Allan is on board in an expanded role," said BBC head of F1 Ben Gallop. "His experience and expertise is an invaluable addition."

McNish, 44, is one of the most respected names in the world of motorsport and worked as F1 co-commentator alongside James Allen for Radio 5 live in the 2013 season.

He combined his media role alongside his driving, where he won his third Le Mans 24-hours race and rounded off the year by winning the FIA World Endurance Championship.

After a 25-year career in motorsport, the three-time British karting champion retired in December.

McNish will be using his extensive experience from across all areas of motorsport to steer audiences through the intricacies of the forthcoming season, which promises to be a fascinating one with all the technical changes ahead.

"Now that I have hung up my racing helmet, I am really looking forward to joining the BBC team again for what I am sure is going to be a fantastic new F1 season," he said.

"With so many technical rule changes, as well as team and driver movements, there will be lots of things happening on and off track for the BBC team to bring to you".

Chief analyst Eddie Jordan and ex-McLaren driver and pundit David Coulthard both return and Suzi Perry resumes her duties as TV anchor for 2014 after her first season at the helm last year.

Ben Edwards once again leads the commentary on TV with Lee McKenzie and Tom Clarkson bringing all the news from the pit lane.

On Radio 5 live, Allen leads the coverage as F1 correspondent and commentator with Jennie Gow as F1 presenter and pit lane reporter.

BBC One and BBC One HD will show nine races live on TV, including Silverstone, Canada, Monza and Spa, as well as the season finale from Abu Dhabi, with extended highlights programmes of the remaining races. This goes the same for practice and qualifying.

Every Grands Prix of the season will be live on BBC Radio 5 live or 5 live sports extra with live coverage of practice and qualifying. Plus all the action, news, reviews via the BBC Sport app and the BBC Sport website, with Andrew Benson as chief F1 writer.

Full details of the BBC's 2014 coverage will be announced in due course.