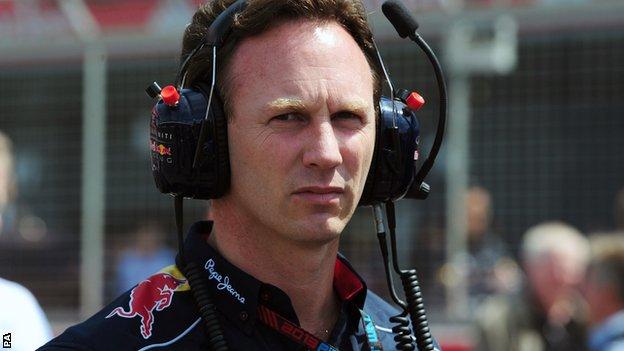 Red Bull have questioned plans to introduce a budget cap into Formula 1 next year.

Discussions have so far centred on a figure around the $200m (£126m) mark for a maximum budget for a season.

"A top-down way of dealing with costs is not the right way of doing it," said Horner. "Bottom-up is a better way."

Horner said "absolutely everybody" who was present at last week's meeting agreed F1 needed to reduce costs but "a couple of teams" did not think a budget cap was right way of addressing the issue.

Both Horner and Michael raised their hands when asked if they objected to the idea of a cost cap.

The FIA has committed to introducing a budget limit in 2015 given a number of F1 teams are struggling to make ends meet.

As a result, F1 bosses are planning a series of meetings to iron out a figure for maximum spend and to define what aspects of running a team should be excluded from the cap before it is finalised by the end of June.

McLaren, who have been proactive in pursuing cost-saving ideas, refused to comment. Insiders say they have reserved their position on the fundamental principle of a cost cap, rather than objecting to it outright, until they know more details and what the proposed limit is.

Top teams Red Bull, Ferrari and Mercedes are all spending more than £200m a year on their F1 programmes, whereas teams such as Marussia and Caterham, who were at the back of the grid in 2013, exist on less than a third of that.

Horner added that a $200m budget cap was not much help to the smaller teams, claiming it was "significantly beyond most of their limits anyway".

He also said the introduction of new turbo engines was driving costs even higher.

"We're introducing the most expensive power unit in the history of the sport and all the associated costs with it," Horner said.

"It's a bit stupid talking about controlling costs when we're inflicting ourselves with the most unbelievable cost hike the sport has ever seen."

He said the costs associated with the new engines were "ridiculous", adding: "I don't know how the little teams are coping."

A number of rivals are sceptical about the commitment of world champions Red Bull to cost control.

One team, who wished to remain anonymous, claimed Horner was guilty of "petty arguments" and constantly tried to "obfuscate the argument".

Horner rejected that view, though, claiming: "To say we are not in favour of cost-saving is absolute nonsense."