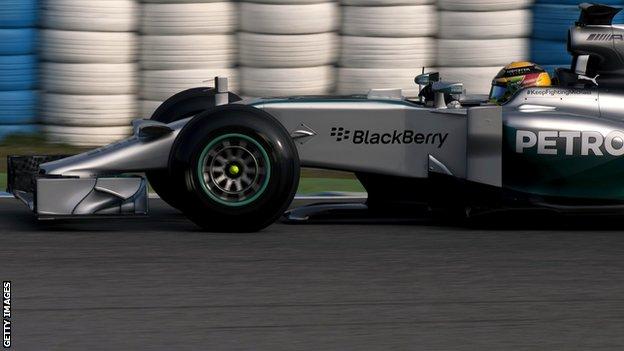 The controversial nose designs of new Formula 1 cars could be a safety risk, the sport's leading designer says.

Red Bull's Adrian Newey is "concerned" the lower noses could go under a car if one was hit from behind.

He said this was "much worse" than a car taking off, which is one scenario the rules were created to prevent.

"I am concerned the opposite may happen and if you hit the back of a car square on, you go underneath and have a rear crash structure in your face," he said.

I think the shape of the cars, the sound of the cars, is all part of the drama of F1. And it is a shame if the cars are unattractive

The noses were lowered this year for two main reasons.

One was to reduce the chances of cars taking off in a rear impact, such as when Mark Webber's Red Bull somersaulted and landed upside down after running into the back of Heikki Kovalainen's Lotus in Valencia in 2010 - Webber was uninjured.

The other was to reduce the risk of a driver being injured by a high nose in the event of a T-bone accident - when the nose of one car hits the cockpit of the other in a perpendicular impact.

The new regulations were three years in the making and stipulate a minimum nose height, which was included to ensure the concerns Newey has now raised were not an issue.

The teams have been involved in every stage of the development of the rules.

And other senior figures believed the noses would be more likely to break in the event of an incident such as that described by Newey before lifting the car in front to any degree that might be a safety concern.

Insiders say Newey never raised this issue during the consultation process, nor did he attend any of the technical working group (TWG) meetings where the nose rules were finalised. The TWG considered a large range of potential accident scenarios and tried to reach the best compromise.

The nose designs have been criticised for the ungainly look they have created on many cars.

Newey said: "I think it is a shame if regulations create ugly solutions, as we have seen in some of the cars that have been released.

"It is not a strictly technical matter as we have to design a car that we feel gives the best performance regardless of the styling.

"But I think the shape of the cars, the sound of the cars, is all part of the drama of F1. And it is a shame if the cars are unattractive."

In a meeting last year, Ferrari technical director James Allison did raise his concerns the cars were likely to be ugly as a result of the new rules and suggested the teams look at a solution.

Counterparts in other teams told him they did not think the designs would develop the way he was predicting, which is exactly how many have indeed turned out.