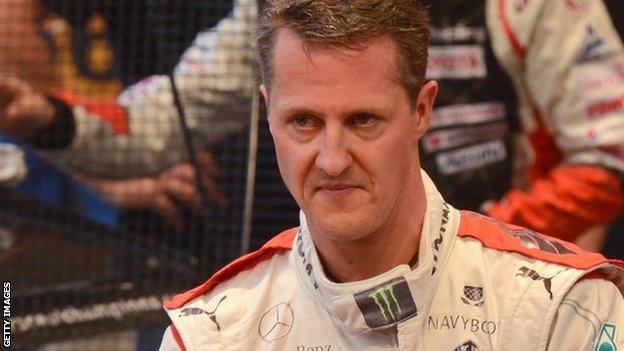 Exactly one month since a ski accident left him with critical head injuries, Formula 1 legend Michael Schumacher remains in a medically induced coma.

There has been no official update from the French hospital where he is being treated since 6 January.

But his manager Sabine Kehm has told the BBC that the seven-time world champion remains in a "stable" condition and confirmed that he had not fallen into a natural coma as some newspapers have speculated.

However, millions of fans and the motorsport community remain desperate for more information, and there remain a number of unanswered questions about the 45-year-old's condition.

Here, two experts - Professor Gary Hartstein, Formula 1's chief medic between 2005 and 2012, and Mr Colin Shieff, neurosurgeon at the National Hospital for Neurology and Neurosurgery in London - attempt to tackle some of those questions.

It is important to stress that neither man has been involved in the Ferrari legend's treatment, but they offer their insights into how a patient with injuries like Schumacher's might be treated and run through the possible prognoses based on their experience of similar cases.

Can he recover fully?

Both Hartstein and Shieff believe it will be difficult for Schumacher to return to the same level of health he had before his accident.

"It is extremely unlikely, and I'd honestly say virtually impossible, that the Michael we knew prior to this fall will ever be back," Hartstein said.

With every injury being unique, a variety of symptoms ranging from mild to severe can be experienced. But the effects of brain injury fall into three main categories:

"I think that it will have to be considered a triumph of human physical resiliency, and of modern neurointensive care, if Michael is able to walk, feed himself, dress himself, and if he retains significant elements of his previous personality."

"It is generally accepted that the longer a patient is in a reduced state of consciousness, the less likely they are to make a good recovery," he said.

"It is still possible to regain consciousness, but this is far from certain.

"At best, there will be handicaps in respect of communication, memory, mobility and independence.

"At worst, the patient may remain in 'low arousal state' with little awareness of surroundings, some response to comfort/discomfort, cycles of being alert, occasionally appearing to recognise or make attempt to communicate."

Schumacher has been in an induced coma for 31 days since his accident at the French Alpine resort of Meribel.

After several months, a patient experiencing an extended period of reduced consciousness may be diagnosed as being in a persistent vegetative state (PVS).

Patients in this state have not recovered sufficient consciousness to make any form of communication, but can breathe without mechanical assistance.

They may have sleeping and waking cycles allowing them to be fed, but they do not speak, follow commands or have any understanding of what has been said.

The general consensus among clinicians is that a recovery of sorts is possible from PVS although it is impossible to predict outcomes, which can place intense emotional pressure on the families of such patients.

What treatment is he likely to be receiving?

Schumacher's condition was described as "stable but critical" in the most recent statement released by doctors in Grenoble on 6 January.

It was unclear, said Hartstein, whether Schumacher was still in that condition. And he stressed he had not seen him, had access to any of his medical documents or spoken to any of the staff treating him.

However, he said he based his opinions on the information put into the public domain by the team caring for the German and his own clinical experience with similarly injured patients.

The American, who now lives in the Belgian city of Liege, said: "'Critical' means imminent life threat or threat to a vital system.

"Michael [would no longer be critical] if the intracranial pressure - the pressure inside his skull and brain tissue - has normalised.

"He is stable as his physiological parameters are now acceptably 'constant'.

"I would define a patient as being critical if they are ventilation-dependent. But we can't say for sure if Michael is still reliant on breathing assistance because no details have been released."

"I say this because it is rather likely that he still requires this level of care given his injuries. But, also, if he had been moved from the ICU to a normal room, this would have been sufficiently newsworthy to have almost certainly been announced."

Patients are put into a medically induced coma - a state of depressed consciousness which needs mechanical assistance - when they have suffered a traumatic brain injury from a variety of causes, including accidents, falls and assaults.

"It is broadly similar to anaesthesia for surgery," explained Shieff, who is also a trustee of UK brain injury charity Headway. "It requires sedation and artificial respiration (ventilation) through a tube placed in the airway as the sedatives will reduce or remove the drive to breathe.

"The benefits come from resting the brain after an [injury]. There is no medical procedure that can directly assist the brain in its recovery."

Patients in induced coma will receive medical and nursing care including - if still needed - supported respiration through a ventilator, fluids and feeding administered by tube, and physiotherapy.

Why have there been conflicting reports?

The 6 January statement on Schumacher's condition added that the medical team would not be giving further details of his treatment, or holding news conferences "for the time being" in a bid to protect his privacy.

Two days earlier, his manager Sabine Kehm warned fans to treat reports about his health from sources other than her or doctors as "pure speculation".

Various newspapers across Europe have run stories about Schumacher's condition since the last media briefing 23 days ago.

On 13 January, the Daily Telegraph reported that the Zurich Tages-Anzeiger, a daily newspaper in Switzerland, said French doctors had begun tests to see which areas of Schumacher's brain had been damaged.

The Daily Mail said on 15 January that fears were growing in Germany that he may be in a coma for the rest of his life.

Nine days later, the Daily Mirror said it had been claimed doctors had no plans to wake him from the coma.

"The bitter irony of the appalling situation in which Michael Schumacher finds himself is that he is getting far more unqualified support than he ever did during his career," he said.

"The most successful Formula 1 driver of all time, with career statistics that still look dizzying even in the context of Sebastian Vettel's recent success, was a divisive figure while racing and never far from controversy.

"Now, though, as he lies unconscious in a French hospital, his plight has focused attention more on what he achieved and less on how he achieved it.

"And his feats were truly remarkable. He was one of the greatest talents ever to step into a racing car. With his Ferrari team he took F1 to a new level, setting fresh standards for all to aspire to.

"Whatever fate awaits him, his sporting legacy as a legendary figure in F1 is assured."