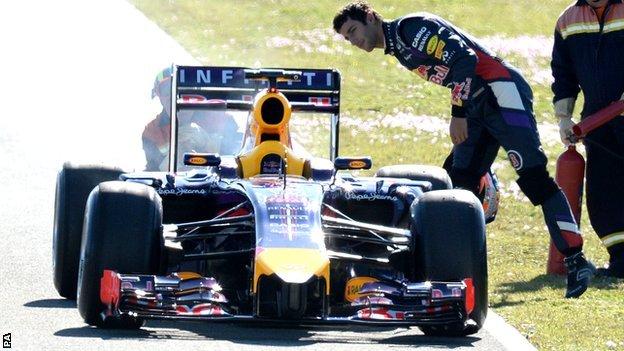 Sebastian Vettel only managed 11 laps in his new Red Bull at the first pre-season test last week, but I don't think he will be too worried yet.

With the new Formula 1 season a little over five weeks away, there is no doubt Red Bull are already at a significant disadvantage to their rivals.

Their inability to do any serious running at a disastrous first pre-season test in Jerez in Spain last week means they have lost a third of all their possible mileage in preparation for racing under the biggest set of rule changes in a generation.

But Vettel has won the last four championships, and he has won them from the front and from behind. He knows what the game is about and can afford not to be too anxious.

His new team-mate Daniel Ricciardo, who completed only nine laps, will be a little more eager to be in the car.

This is his big chance, following his promotion from Toro Rosso, and for him the more mileage the better, especially as his first grand prix in the limelight is his home race in Australia.

So he'll be the one whose heart is fluttering a little. But Ricciardo is young, and has speed and talent, so even he will not be too worried yet.

Overall, I think Red Bull's drivers will be disappointed they didn't get out in Jerez, but their eyes will be very much focused on the next test in Bahrain in a fortnight's time.

Race against time for Red Bull

Renault had major problems at the Jerez test that meant none of their three teams got any significant mileage - and Red Bull were hit even worse than Toro Rosso and Caterham.

It's crucial that they get that sorted before Bahrain.

But the reality is that even if they do fix it, by then they are going to be a significant number of kilometres behind going into Melbourne, and they will carry that negative mileage through the first few races of the year. That will affect some teams more than others.

The Bahrain test will give us a better indication of where the teams are, but the first blood has already been lost by the Renault teams.

How does having a bad test affect a team?

A test as bad as that suffered by Red Bull in Jerez hits a team right across the board.

The engineers do not gain any understanding of the car. The team don't know if the tyres will last as they are meant to. The designers don't get to find out if the car behaves in the way their simulations said it would.

The drivers don't get to learn the new fuel-conservation driving style they will need to employ at some races this year as a result of the introduction of a fuel limit - and Melbourne will be one of them, as fuel consumption is high there.

And the mechanics don't get a chance to understand how it is to work on the car. If they have to change something, how quickly can they change it? Can they do it in a practice session, or does it have to be in between sessions?

And the team don't divine any understanding of where they are relative to the opposition.

With a rule change as big as this - with totally new engines allied to major aerodynamic changes - everybody needs every single kilometre they can get.

As things stand right now, three of the top teams - Mercedes, Ferrari and McLaren - have a significant mileage bank, and the two others - Red Bull and Lotus, who did not even go to Jerez - have effectively zero.

What if Renault's problems continue?

There are two more tests before the start of the season - with the final one also in Bahrain at the end of the month. Teams have to have a successful time there if they want to have a good start to the year.

There is not very much time between now and the start of the first Bahrain test on 19 February.

"The word from inside Red Bull is that these issues, while they may have prevented them running in Jerez, are far from a disaster and should be relatively easy to fix in time for Bahrain.

"That may well be the case, but one senior engineer from a rival team said he would be surprised if Red Bull had done enough running to discover whether they had overheating problems. Normally, he said, such things only properly reveal themselves after 10 or more laps of hard running.

"The fact Red Bull were encountering problems almost as soon as they left the pits suggests, therefore, a relatively major problem, one that may not be easy to solve with a heat shield here and an extra hole there."

If Renault know what's wrong, the engineers can work out a solution. But if there are multiple problems and multiple questions - as Renault said there were after Jerez - then that is much more difficult to do.

However, they are an immensely capable company and they will want to get on top of things because they understand how important it is to have a good start to the season.

I remember back in 2003, when I was reserve driver for the Renault F1 team, they were having reliability problems pre-season. The engines kept having a technical failure after about 200km. Then they turned up at the first race and were suddenly reliable. Renault had effectively solved it from one day to the next.

I would imagine this will be a similar sort of thing, where it is not a question of the reliability of the engine, but rather a case of getting all the parameters working together. Once it clicks, it will be fine.

Equally, Red Bull have proven their ability to get things working very quickly, even when they have not started the season as well as others.

There is no question they are behind. But equally I would not put any money on them not being able to sort this out. The question is how long it takes.

You don't win a championship at the first race of the season, but you can certainly make it very difficult for yourself if your main competitor starts to lay down big points and you don't.

Many levels of complexity

These new F1 turbo engines are incredibly complex pieces of machinery, with the recovery of energy by their two electric motors an integral part of their performance.

I have some experience in this field as we used very similar technology in the Audi sportscar that I raced over the past few seasons.

Getting everything working together is extremely difficult to achieve, and having to do so within the tight packaging constraints of a modern F1 car makes it even tougher.

For all the teams, making sure the cars are reliable all the time will not be easy.

The new engines have a 'hybrid' aspect called an energy recovery system (Ers). These feature a more powerful version of the kinetic energy recovery systems (Kers) in use for the past two seasons, recovering energy from the rear axle, and a second system that does the same from the turbo using the exhaust gases.

In the past few seasons, Kers-system failures happened quite often, especially on the Red Bull cars.

But because Kers had such a limited influence on the overall performance, and because by the time it did happen Red Bull were generally running at the front anyway, it had relatively little effect on races.

But that will not be the case anymore. The influence of these 'hybrid' aspects of the engines has increased enormously - they are 10 times more powerful than they were last year.

So an Ers failure will be a major performance disadvantage. Bluntly, a team won't be able to win a race if that happens.

That means reliability is crucial because one of the key deciding factors at the first race will not be who has the fastest car by 0.1-0.2secs, it will be who has the most reliable car. Points will be picked up for that.

Cars will speed up

One final point to make about the Jerez test is that the cars will get quicker.

In Jerez they were a good five or six seconds slower than they were this time last year, but that test was effectively an extended shakedown for all the teams, because of the complexity of the cars.

I would not expect them to be as fast as last year by the time they get to Melbourne for the first race, as the cars were at the end of a five-year rules cycle in 2013.

However, I would think the cars will be no more than a second or two off last year's pace by then, and getting close to matching it by mid-season.

The thing that might stop them getting down to last year's lap times is the tyres. If Pirelli go conservative and produce harder tyres to cope with the extra torque of the new engines - as they say they will - then that will inevitably make the cars slower.