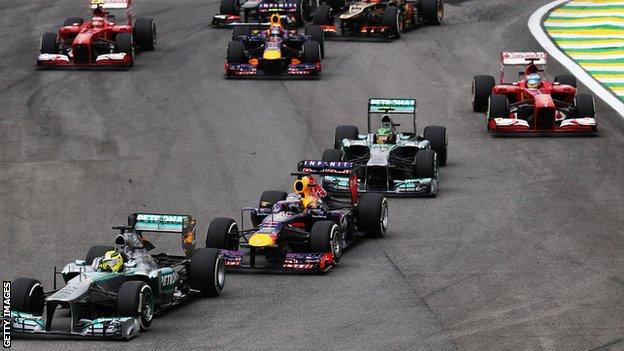 The majority of Formula 1 teams are against Bernie Ecclestone's proposal to award double points for the final three grands prix of this season.

The sport has introduced double points for the last race in Abu Dhabi but F1's organiser wants to extend it, for which he needs the teams' unanimous approval.

BBC Sport has learned there is widespread disquiet at the latest plan.

Only Lotus would comment, a spokesman saying: "The best thing would be to make all the races double points."

Discussions with Ecclestone are ongoing but teams have a range of concerns about the idea:

In theory, only one team needs to object for Ecclestone's three-race plan to be scuppered.

However, one insider pointed out that Ecclestone's position within F1 is so powerful, and that he has significant influence with the teams. He added: "If Bernie wants it, he'll get it."

Ecclestone says his motivation for introducing double points at some races was falling television audiences last year after the championship was won by Red Bull's Sebastian Vettel three races before the end of the season.

He initially proposed double points for the last three races, but when teams objected to that plan, he and FIA president Jean Todt pushed through the one-race idea in December.

Ecclestone wrote to the teams last month saying he now wanted to go back to his original idea and extend the plan to the preceding races in the USA and Brazil as well as Abu Dhabi.

Sources say the promoter of the Brazilian Grand Prix - a close ally of Ecclestone - has asked for double points to be awarded at that race.

Ferrari had already made clear their unease about the single-race scheme before Ecclestone's latest proposal.

Their president Luca Di Montezemolo said in December he felt it was "artificial", although he has since accepted that it should be employed at the final race this season on a trial basis.

And Mercedes co-team boss Toto Wolff said last week that he also had concerns about it.

"Ninety-nine per cent of the fans say it is the wrong move so perhaps it is something we have to revisit," Wolff said.

Red Bull team principal Christian Horner said last week that he felt extending the scheme to the final three races would "take away an element of lottery over that last race".