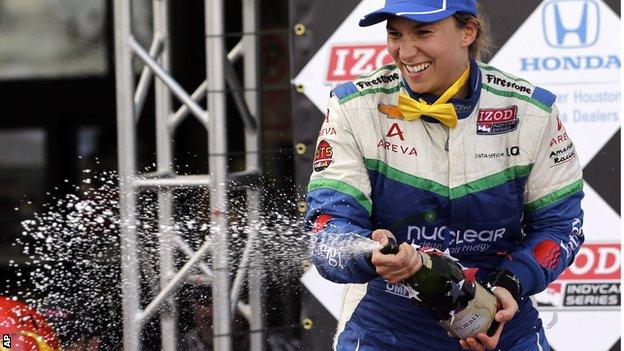 Swiss driver Simona De Silvestro has joined Sauber with the aim of racing in Formula 1 in 2015.

Sauber team boss Monisha Kaltenborn said: "We regard her as a very talented driver so we decided to support her on her way to the pinnacle of motorsport."

De Silvestro, who has been named an 'affiliated driver' at the Swiss team, said: "This is a major step towards me achieving a life-long dream and I'm so happy to have the opportunity to take this step with such a great team."

To qualify for the 'superlicence' required to race in F1, De Silvestro will have to complete 300km of testing in an F1 car, although there are provisions to waive that if governing body the FIA considers a driver has proven their capabilities in a suitable category.

IndyCar racing is the top echelon of single-seater racing in the United States. De Silvestro won the 'rookie of the year' award at the blue riband Indianapolis 500 in 2010 and was second in Houston last year.

That plan did not materialise because it became clear Sirotkin was not yet ready for F1. The team's race drivers this year are German Adrian Sutil and Mexican Esteban Gutierrez, with Sirotkin as reserve driver.