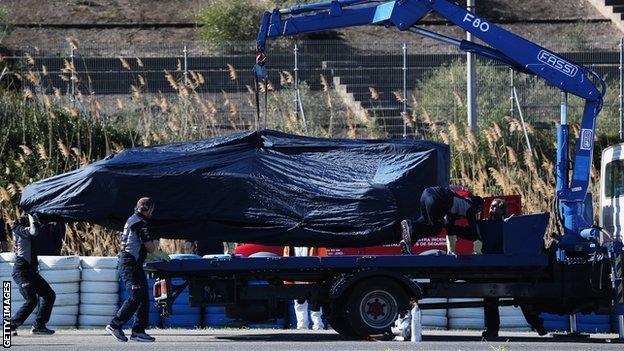 Renault says it is making progress on the engine problems that led to a disastrous first pre-season test but admits it is still behind schedule.

The problems prevented any of its teams getting meaningful mileage in Jerez last month, while rivals Mercedes and Ferrari both had successful tests.

Renault engineering chief Remi Taffin said: "The problems are worse from the outside than they are from the inside.

"It's a difficult moment but we will get through this."

Renault, the suppliers of world champions Red Bull, Lotus, Toro Rosso and Caterham, had problems at the first test in Jerez and has since been working flat out to solve them ahead of the second test in Bahrain next week.

"We are still a bit behind schedule but we are where we would normally be at the first test," Taffin said.

He said he expected the engine to "work fine in the car" in Bahrain and that should enable the teams to start working on their cars.

Taffin insisted that Renault would be "ready" in time for the first race of the season in Melbourne on 16 March, but added: "The question is the same as it is for all the manufacturers: where will we be on performance? We will see."

The problems were so severe in Jerez that none of the three Renault teams who attended - Red Bull, Toro Rosso and Caterham - were able to do any car set-up and evaluation work.

Renault is struggling to get all the components of the complex new turbo-hybrid engines that have been introduced to F1 this year working together.

The new 1.6-litre V6 turbos feature extensive energy-recovery technology, with electric motors regenerating energy from both the rear axle and turbo to provide extra power. These systems, which are integrated with battery packs to store the energy, need to be controlled by advanced computer programmes.

In Jerez, Renault suffered problems with both hardware and software on the new engine.

Taffin said he was confident Renault had now solved the hardware problems but has still to get on top of the issue of the software controlling the various parts of the engine. The fact they are not communicating as well as they should is also leading to excessive drivetrain oscillation.

New parts were tried out at short tests with Lotus and Toro Rosso in the last week but, while the Lotus test in Jerez went without problems, the Toro Rosso one in Misano did not.

Taffin said the issues with Toro Rosso were "not a surprise - we knew what we had in the car and we thought we would get away with it, but obviously not. We have since worked on it."

He denied that the ongoing reliability problems would lead to Renault lacking performance once the specification of the engines is frozen at the end of this month to control costs.

"If we have reliability issues after applying for the engine for the year, it's more difficult to make changes, but there is still a rule that allows us to change parts if we have reliability problems, which we did in the past and I think we will still do," Taffin said.

"But we are not saying we have a major issue on reliability.

"We have good parts. Each part works fine. We just have to make them work together.

"We are quite happy with each component in terms of the level of competitiveness but we are struggling when we put everything together in the car and we have to get the most out of it.

"So when we get to Bahrain or race one, it will be still these components, but it will be our job to get the most out of them. We are happy with the level [of performance] we have got at the moment."