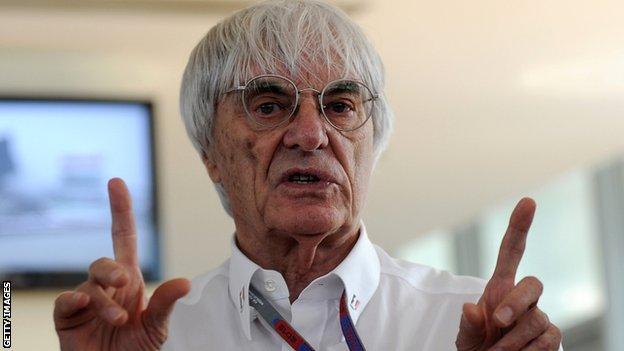 Bernie Ecclestone is pushing ahead with his attempt to introduce double points at the final three races of the year despite widespread unease.

The decision to award double points in the final race has been met with uproar by fans and most teams believe going further would be a mistake.

Win the last three and you can win the championship. It's a whole different scenario

But Ecclestone is to try to get his new plan introduced after pre-season testing concludes in early March.

The Formula 1 boss, 83, needs unanimous approval from the teams to succeed.

Ecclestone is said to have backing from Red Bull, who are on the back foot heading into the new season following a troubled start to testing.

Team principal Christian Horner, a close ally of Ecclestone, has said he believes extending the scheme to the final three races would "take away an element of lottery over that last race".

But the majority of the other teams privately believe extending double points to the last three races is unwise.

There is a belief that it is gimmicky, that it undermines the sport and that it is the wrong solution to the fall in television audiences that followed after Red Bull's Sebastian Vettel tied up last year's title early, which is the reason Ecclestone has given for introducing double points.

Ecclestone believes having double points at more races would make the end of the season more exciting.

"Why should it devalue six races before the end? People will be following like hell to see who's there at the end of the races. Win the last three and you can win the championship. It's a whole different scenario."

The plan for the final race to be double points was introduced last December, and support from Jean Todt, president of governing body the FIA, was crucial in allowing it to pass smoothly.

However, sources say Todt is wary of the backlash against the plan and will only support Ecclestone in his push to extend the ploy to the final three races if the teams give their unanimous backing.

The issue is expected to be discussed at a meeting of F1's strategy group early next month.

This body comprises Ecclestone, Todt and six of the teams. Decisions can pass by a simple majority of votes; Ecclestone and Todt have six votes each, the six teams one each.

Even if the new plan passes the strategy group, it would still need unanimous approval of all the teams, according to the rules.

However, insiders are concerned that Ecclestone will get his way even though a majority of the teams would prefer the three-race idea not to be introduced.

Such is his influence, Ecclestone has a number of ways of persuading teams to back him even if they do not really want to.