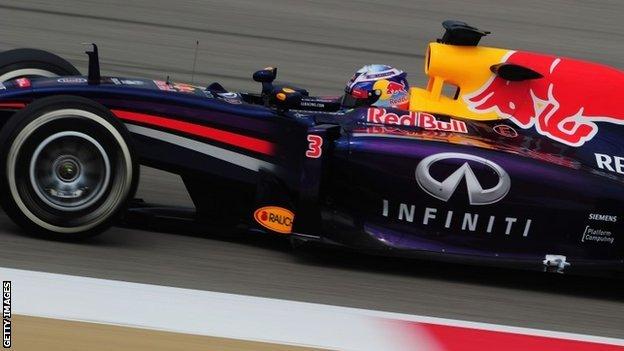 How they finished on day two

Hamilton was stopped by a gearbox problem after doing 89 laps.

Perez was fastest for the second consecutive day with a time 0.064 seconds faster than Alonso and 0.173 quicker than Ricciardo.

Hamilton was 3.471 adrift of the Mexican and behind Williams's Felipe Massa, McLaren's Jenson Button and Marussia's Jules Bianchi.

"I just don't know where we are compared to others but we'll find out when we get to Melbourne. So far I haven't found a balance I like but I will do before Melbourne.

"There are no specific problem areas, just lots of different things we need to improve.

"It might be frustrating at times but finding them at this stage is actually a positive."

Red Bull continued to struggle with reliability problems and restricted running to a series of short outings, although there were signs towards the end of the day that their problems were easing.

Ricciardo did a run of about 20 laps late in the afternoon after the team attempted to ease their overheating problems by cutting extra vents in the rear bodywork.

Ricciardo managed a total of 66 laps in the day compared to the 122 of Alonso and 108 of Perez.

"A big improvement everywhere and a much more optimistic outlook now I think," said Ricciardo.

"We still have a lot to learn and understand, but we're making progress and the past two days have been a big step in the right direction."

The Australian's team-mate Sebastian Vettel will drive over the weekend on the final two days of testing before the start of the season in Melbourne on 16 March.

The team have yet to do any race-distance simulation work as they and engine partner Renault work to find a solution to the problems that are preventing them racking up the miles achieved by rivals Mercedes, Ferrari and McLaren.

But Ricciardo's lap was by far the fastest the team have managed over six days in Bahrain and could well be a sign that Red Bull will be competitive once they solve their reliability issues.

Lotus, who had to cut their running short on Thursday when a new exhaust broke, also hit trouble with an engine fire and had to end their running two hours early after Pastor Maldonado had done only 31 laps.

The Venezuelan was 10th fastest as concerns mount about Lotus's readiness for the new season.

There was encouraging news for Marussia, languishing behind even Red Bull in the pre-season mileage charts, as Frenchman Bianchi covered 75 laps on his way to the fifth fastest time.

Rivals Caterham had to end their running early following a fire when Swedish novice Marcus Ericsson had done 55 laps.