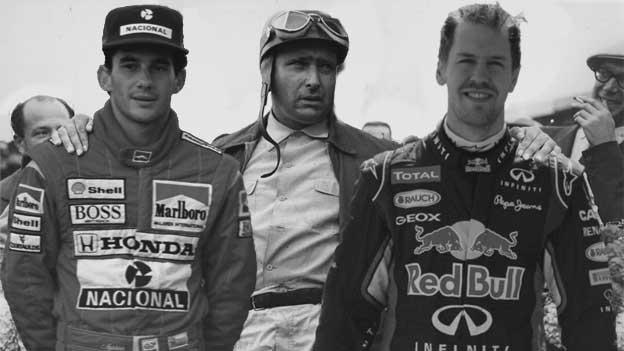 Who would top the ultimate Formula 1 league table?

BBC Sport has examined all the data from every race between 1950 and 2013 to see if the numbers can provide an answer.

While statistics cannot tell the whole story they provide a fascinating insight into driver performance across the decades ahead of the season opener in Melbourne, Australia, on Sunday.

Five-time world champion Juan Manuel Fangio comes out on top in three of the four categories, but there are also surprise findings, such as Lewis Hamilton being 10th on the list of most points per grand prix start.

When broken down by nationality, Britain tops the tables both in terms of race victories and world championships, with Germany a close second.

Here's the top 10 in each category, plus analysis from BBC Sport's F1 chief writer Andrew Benson and links to the complete tables.

No matter how many times you hear them, Juan Manuel Fangio's Formula 1 career statistics are still gobsmacking.

Twenty-four wins in 51 races - every other race, give or take. With four different teams, over seven years. An incredible achievement. All the more so given the man did not come to Europe until he was 39.

It is no wonder that even now, 60 years after his heyday, many still regard the Argentine as the greatest racing driver that ever lived.

But this table also underlines the claim to greatness of Stirling Moss, as well as the importance of machinery in the overall statistics of F1.

Talented and determined though he was, very few experts would pick Damon Hill as one of the 10 greatest drivers in history. But there he is in 10th place, the result of spending the vast majority of his career at Williams during one of their golden eras.

It's not surprising that this list, formulated by applying the current points system, is remarkably similar to the best-win-ratio list - there are, of course, most points for a win.

But the differences are just as interesting. Lewis Hamilton, 11th on win ratio, is there in 10th place, a reflection of the excellence of his career so far. Likewise the remarkable Sebastian Vettel is even higher in this list, the result of the superlative standards he and Red Bull have set since 2009.

And there are some interesting names on it that rarely feature in F1 'best ofs' - Nino Farina, the first world champion, and Jose Froilan Gonzalez, Ferrari's first winner. They may have been overshadowed by their brilliant 1950s contemporaries Juan Manuel Fangio and Alberto Ascari, but this underlines their quality.

Most striking of all is that Fernando Alonso, who holds the record for most career points based on the traditional scoring system, is not in the top 10 on a points-per-start ratio once all seasons are converted to the current system. He's not far off, though - just outside in 11th.

A telling list, this. Skewed to the modern era for two reasons - the better reliability of the cars and the increased number of races.

Alonso's appearance in third behind just Schumacher, whose points from the 1997 season have been included in the table despite him being stripped of his second place in the championship, and Alain Prost underlines the remarkable consistency he has shown in his career. Rubens Barrichello's fifth place is due to the record-breaking length of his time in F1.

And David Coulthard in eighth is a reminder that, although he wasn't on the level of Schumacher and Mika Hakkinen, the now ace broadcaster was a mean old pedaller himself over a long period.

The natural reaction is to assume that Ayrton Senna would top this but of course there's that man Fangio again.

Like Jimmy Clark, the Argentine's pole-ratio record is even more remarkable than his wins, which underlines the extent to which each dominated his era.

Sebastian Vettel is the highest modern driver but Lewis Hamilton's position just a couple of places behind him despite the superiority of Vettel's equipment over the last five years underlines why Hamilton is regarded as the out-and-out fastest of his era - and one of the fastest ever.

The headline here is buried in fifth place. Britain's 14 world titles is a remarkable achievement and one to be celebrated - how many people in the street would know that?

But comfortably the most successful country, when population is taken into account, is tiny Finland.

Germany ranks highly but this mighty nation owes its position to the remarkable success of just two men. Without Michael Schumacher and Sebastian Vettel it would not feature at all.

Britain, Germany, Brazil - no surprises in the top three. But France's position in fourth will shock anyone who came to F1 in the last 20 years and knows nothing of what preceded it.

France invented Grand Prix racing and through the 1970s and 1980s provided a long succession of top-drawer drivers, from Francois Cevert and Jean-Pierre Beltoise through Jacques Laffite, Rene Arnoux and Didier Pironi to the brilliant Alain Prost.

But then, as the money that funded their rise dried up, so did the river of talent. And then France lost its race, too. There's something not right about that. Oh, and Spain is in 10th through the efforts of just one man - Fernando Alonso.

One of the great lessons of this exercise is to underline the dubiousness of using only statistics to back up any argument about who is the greatest racing driver of all time.

For all live races, coverage will be live on BBC television, radio, online and red button.

For highlights race weekends, there will be live radio and online text commentary with video highlights on television, online, red button.

Audiences can access the BBC's digital coverage from any device through the BBC Sport website, and via the BBC Sport apps for mobiles, tablets, and connected TVs.

After all, which statistics do you use?

Some argue that having the most wins automatically makes Michael Schumacher the greatest ever. But on wins-per-start ratio he is 'only' fifth, behind Juan Manuel Fangio, Alberto Ascari, Jim Clark and Sebastian Vettel.

Equally, racking up points is ultimately what win world championships, so should that list be used instead, even if that approach lacks the visceral appeal of wins?

Whichever statistics you choose, none takes into account machinery - or, to be more precise, drivers doing mesmerising things in sub-standard cars.

Many of the defining moments of F1 history have come as great drivers battled the odds in what was not the fastest car.

Statistics alone cannot explain the remarkable achievements of Gilles Villeneuve in taking two victories at twisty Monaco and Jarama in 1981 in his agricultural Ferrari, or Fernando Alonso in winning three races and almost the title in the fourth or fifth fastest car in 2012.

Statistics are an important part of an argument about the relative merits of different drivers, but they certainly cannot provide a definitive answer.

The fact is, there isn't one. And that's the fun of it.

Statistics compiled by Mike Sheppard. Correct at time of publication