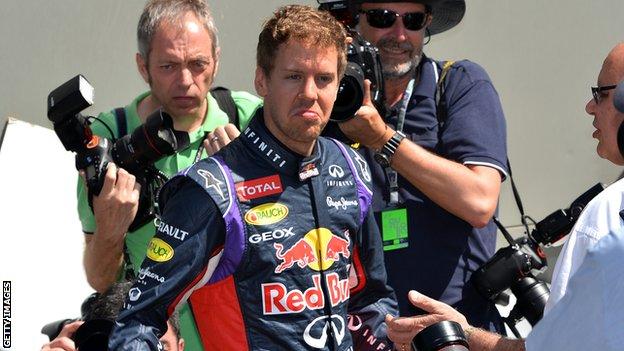 Reigning world champion Sebastian Vettel accepts he is "not in the best position" to win Sunday's Australian Grand Prix but refuses to rule out a challenge for a fifth successive title.

A winter of woe for Red Bull...

Vettel and his Red Bull team endured a torrid time in pre-season testing as they struggled for mileage, lagging way behind rivals Mercedes and Ferrari.

"We're not in the best position for this race," he said.

"But the championship is a different story. There's a long way to go."

Vettel has dominated Formula 1 since winning his first championship in 2010 but the introduction of major new rule changes for this season promises to make it the most unpredictable for years.

Red Bull's struggles in pre-season centred around poor reliability and a lack of performance from their Renault engine.

...but Red Bull give you wins

Vettel says the team have been working hard to rectify any problems and ensure the four-time world champion is in the strongest position possible to challenge at the front of the grid in Sunday's opening race of the season.

The German accepts there still remains a degree of uncertainty over just how the Red Bull car will perform on the Albert Park circuit.

But regardless of what happens this weekend, Vettel, who has not been beaten on the circuit since July last year, is adamant that it will not take long for Red Bull to get back to their best.

"The last four years have been very successful for both Red Bull and Renault," added Vettel.

"Yes it has not been a great start of the year for both of us, with mistakes and problems on both sides.

"We are not stupid. We would love to be in a different position going into the first race and have a bit more time but it is the same for everyone.

"We will obviously try to get the maximum we can and see where we are on Sunday.

"We have to take small steps at this stage. Then, for the rest of the year we have a strong team and strong group in place, so I am confident we will be in good shape not far from now."