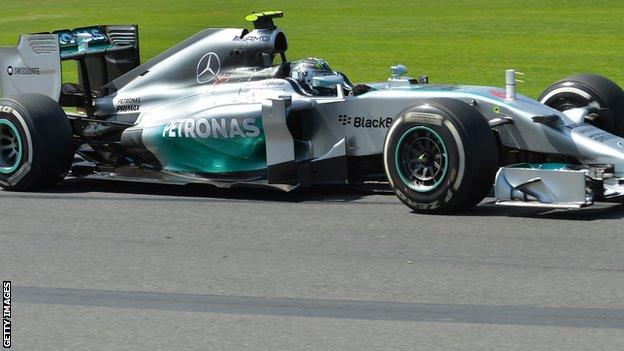 He was 1.391 seconds clear of Jenson Button's McLaren in second place, with Ferrari's Fernando Alonso and Mercedes' Lewis Hamilton close behind.

Hamilton failed to drive a clean lap on the fastest tyres so the 1.544secs margin to Rosberg was not representative.

Red Bull had an impressive Friday after a disastrous pre-season testing programme, but Vettel was clearly still struggling with the car.

Fourth fastest on the medium tyres with heavier fuel early in the session, Vettel was battling oversteer on the faster 'soft' tyres and could not set a time.

"That's horrible," the world champion said in reference to the performance of the engine. "I can't use that. It doesn't accelerate."

Red Bull's engine partner Renault has admitted it is behind on development and is still struggling to produce software that allows the various parts of its new turbo hybrid engine to perform effectively together.

All the drivers were struggling with a strong wind, with several caught out while braking for Turn Nine and running wide.

That was where Hamilton lost control on his soft-tyre run. He was 0.5secs clear of Rosberg on the medium tyres.

Mercedes remain strong favourites for both pole position and the race win - the car appears to be on a separate level from the rest.

BBC F1 analyst Allan McNish said: "I think Mercedes are probably a second ahead at this point in time.

"Pole position is going to be fought out between Nico Rosberg and Lewis Hamilton. Which one will win? It will be a tough fight.

"After that you have McLaren, Ferrari, Red Bull, and Williams just behind. I think you'll see Alonso up there in third. He needs to do it.

"Raikkonen is getting closer to Alonso after suffering problems on Friday - he's only 0.2secs behind now. He's not quite up to speed with that car yet."

The Brazilian's Williams team-mate Valtteri Bottas failed to set a time after suffering a gearbox problem. The team now face a race against time to get the car ready for qualifying at 06:00 GMT.

Bottas and Sauber's Esteban Gutierrez will both get five-place grid penalties for changing their gearboxes.

Lotus's dire weekend continued. The team had a troubled pre-season testing programme and their reliability problems continued upon arrival in Australia.

The team worked overnight on Friday after managing only 14 laps between both cars and did not get away from the track until 8am local time on Saturday.

Romain Grosjean suffered a misfire early in final practice and his exasperation was clear on the team radio.

Team-mate Pastor Maldonado did get some running but was 5.379secs off the pace in 18th place and ended the session parked by the side of the track after another car failure.