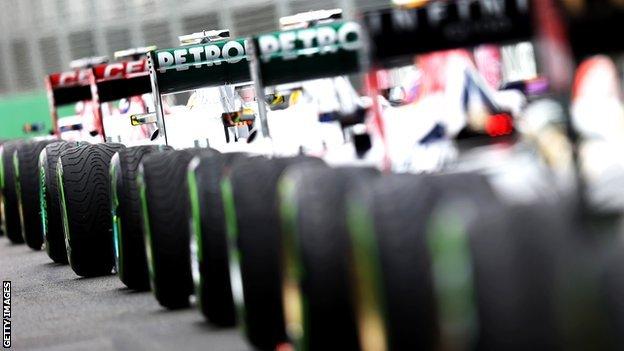 Bernie Ecclestone says he was "horrified" by the noise produced by the new Formula 1 engines, or to be more precise the lack of it. They don't, he says, "sound like racing cars".

F1's 83-year-old impresario was not in Australia for the opening grand prix of the season last weekend. Had he been, he might have heard Lewis Hamilton talk about the "serious challenge" of driving the new generation of cars. Or he could have gone trackside and seen and heard them for himself.

With more power, vastly increased torque and reduced aerodynamic downforce, the new F1 cars are much more difficult to drive than their predecessors.

They slide through the corners, and under power they squirm and flick as the drivers wrestle to keep all that torque under control. You can even hear the tyres squealing as they scrabble for grip.

They still sound like racing cars, despite what Ecclestone says. And instead of the monotone, ear-splitting scream of the old naturally aspirated V8s, the new V6 turbo hybrids have a multi-dimensional tone.

It was certainly loud. Painfully so, in fact - anyone watching at the track needed ear defenders if they did not want to risk deafness.

But it was hardly a classic engine noise in the manner of a throbbing American V8 muscle car or a singing F1 Ferrari V12 from the 1990s, for example. It was more like a swarm of angry wasps amplified through Metallica's sound system.

How Ecclestone can be "horrified" by something he has not heard other than on a test bed in the Ferrari factory more than a year ago is not clear, nor is the agenda behind his remarks.

The fact is, he has always been against the idea of these engines. The noise is one of the arguments he has used, as is the greater cost. Some outlandish figures have been banded about on this, but sources say the increase, on a like-for-like basis, is around 20%.

Yes, money is tight for some of the teams, but you spend the money you have. It's the same for everyone. If you have to spend more on the engine, you try to find the savings somewhere else.

What Ecclestone neglects to mention is that the very future of the sport would have been in doubt had F1 not abandoned the old V8s.

Renault made it clear that they would quit F1 if the new engines were not adopted. The French company needed the technology in the sport to have some relevance to the direction its road cars were going if it was going to be able to continue to justify the enormous investment.

That would have left only Ferrari and Mercedes as engine suppliers for 11 teams - and it's far from clear either would have had the capacity to plug the gap.

Equally, the introduction of the new rules - and of road-relevant, fuel-efficient, energy-recovery technology to F1 - was the sole reason for Honda's decision to return with McLaren in 2015. That deal is exclusive for its first year, but after that the rules dictate that Honda must make their engine available to customers should there be interest.

So instead of having two engine manufacturers and a questionable future, F1 now has four and a rosy one. Instead of using engines that could trace their lineage back to the V10s that raced at the very beginning of the century and before, it is breaking new ground with cutting-edge technology.

The sound the engines produce is a matter of taste. But what about the remarkable nature of what F1's engine builders have achieved?

Last year, the 2.4-litre V8s were producing around 760bhp and using in the region of 150kg of fuel to complete a race distance. This year's turbo hybrids pump out as much as 850bhp and use only 100kg of fuel in a race. That's an increase of efficiency in the region of 35% - for significantly more performance.

Lap times are about three seconds slower than last year at the moment, but at least half of that is a result of the harder tyres, and much of the rest down to the loss of downforce - which, when combined with that extra power, makes the cars a greater challenge for the drivers.

Even with the harder tyres, produced by Pirelli because it was concerned about the effect of the increased torque of the engines, engineers estimate the cars will be as fast as last year before the end of the season.

Now, it might take a bit longer to say all that than "they sound terrible", but how much more compelling a message is it?

And that's before you factor in the technology transfer to road cars, and how developing these engines will undoubtedly accelerate the development of more efficient road cars for all of us - reducing CO2 emissions around the globe, as well as increasing the appeal of hybrid technology itself.

As for the noise, is it really that big a deal?

When this writer was growing up, and falling in love with F1, it was some years before I even saw an F1 car live. I was captivated by the essence of the sport - the unbelievable skill and bravery of the drivers, the beauty and magnificence of the cars, the thrill of the racing.

It was only later that I heard the sound they produced in the flesh. That was in 1983, when the fastest cars were all turbos. They did not sound that different to the current ones. And, no, I wasn't disappointed. The noise wasn't the thing; it was an add-on.

Have we now got to a point where the only spectacle involved in watching a grand prix is to be numbed by the sound of the engines?

Or, as one of my followers on Twitter wrote: "I'm blown away to learn people were spending hundreds of pounds to attend a race just to hear a really loud noise."

Mercedes non-executive chairman Niki Lauda - who, in 1984, became the second man to win the F1 title with a turbo engine - says: "The discussion around the engine noise is ridiculous. It can't be changed now.

"Because everybody involved decided five years ago that they wanted turbo engines, a turbocharger was fitted between the cylinder and exhaust. That means you have a different sound, like every kid knows. We will get used to it."

As for Ecclestone, if he is so concerned about the fans, you might think he would be proposing a U-turn on his decision to award double points at the final race of the season, a move that has generated far more opprobrium than anything to do with the engines.

That, though, is not on the agenda, to the exasperation not only of the people who watch, but many of the teams as well.

Ecclestone is known, among other things, as F1's promoter. There are those in the sport who feel he might be better advised doing a bit more of that, rather than carping about a future of which he seems not to feel a part.