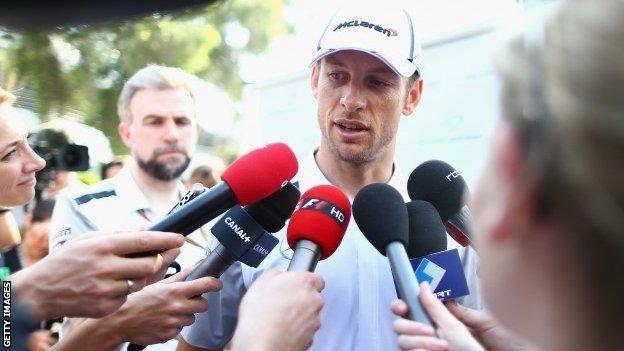 Formula 1 will pay tribute to the passengers on missing flight MH370 at Sunday's Malaysian Grand Prix.

The plane, travelling from Kuala Lumpur to Beijing, disappeared on 8 March and is thought to have crashed with the loss of all 239 people on board.

Drivers are expected to carry messages on cars and helmets and there will be a minute's silence before the race.

"It's devastating to hear about it," said Mercedes driver Lewis Hamilton. "All you can do is pray."

Fellow Briton and McLaren driver Jenson Button added: "It's good that the whole of the paddock are running tributes.

"It's devastating. I really feel for all the families. We will do all we can. It'll be difficult this weekend for all the Malaysian people."

There is a sense of sadness as the country is clearly suffering in the wake of the story of the Malaysian missing flight, which has dominated the world's news headlines the last two weeks. From the main grandstand at Sepang you can see the runway of Kuala Lumpur airport, from which the ill-fated flight MH 370 took off.

The atmosphere so far is understandably somewhat subdued. But this is Malaysia's one chance each year to host a world class sporting event, and despite the sadness, you can be sure that they will put on their best show on Sunday.

Several countries are involved in the ongoing search for the Malaysia Airlines plane that vanished from air traffic controllers' screens over the South China Sea.

On Monday, the Malaysian prime minster Najib Razak announced that "beyond reasonable doubt" the aircraft crashed in the southern Indian Ocean with no survivors.

No debris has been recovered.

Nico Rosberg, who won the season's opening race in Australia, said: "I've experienced first hand how everybody in Malaysia is thinking of families and friends.

"There are billboards and signs here with people who have put stickers up with messages on them."

Race organisers have toned down events around the weekend, with the cancellation of a concert featuring American singer Christina Aguilera and Rain.

Razlan Razali, CEO of the Sepang circuit, said: "We remind ourselves that this is a huge international event, regardless of our state of mourning.

"The world will be on us to see how fragile or how strong [we are]. So we have a huge responsibility to put on a good show."