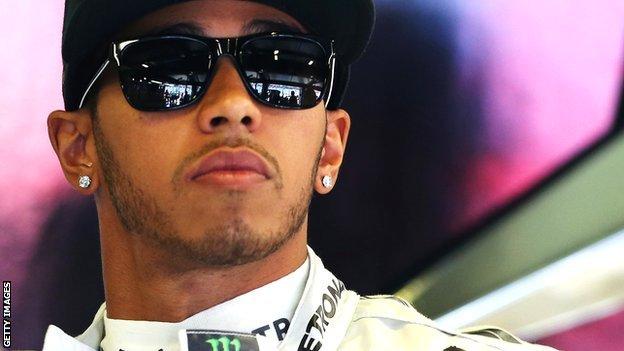 There has been a lot of discussion and controversy about the changes that have been made to Formula 1 this year.

But don't believe anyone who tells you it's no longer a challenge for the drivers. In many ways, it is tougher than before.

The cars are immensely complicated, so there is a lot more work needed to understand how best to use them. And there are new challenges in driving them as well.

As you may know, we have new engines this year and we have to complete the races using no more than 100kg of fuel - about 35% less than last year.

The new V6 turbo hybrid engines are more powerful and have much more torque - or 'push' when you go on the throttle - and the cars have less aerodynamic downforce, so have less grip.

They still drive like an F1 car, but you have to really hone your technique, especially when it comes to using the fuel as efficiently as possible - or 'fuel saving', as we call it.

There are all sorts of ways to affect that: how late or early you change gears, what gear you take a corner in - and in particular, when you're braking and using a technique called 'lift and coast'.

I'm sure hardly anyone knows what that means.

Despite the name, 'lift and coast' does not mean cruising. You're trying to be as fast as you can, and you're still going through the corner on the limit, but you have to approach the corner slightly differently otherwise you won't make the end of the race.

It is nothing new - we've been doing it for years, because it's quicker to run the car with less fuel.

But this year we are doing it a little bit more - although not as much as people are making out - and it is more of a hot topic because of the rule change.

You save most fuel by lifting and coasting in the heavy braking zones at the end of long straights into slow corners.

When you're driving absolutely flat out, such as on a qualifying lap, you would brake at, say, 80m from the corner, come straight off the throttle and get on the brakes, almost instantly together.

But on a fuel-saving lap in the race you'll lift at, say, 200m, and coast to the braking zone. In an F1 car, just lifting off the throttle decelerates the car by 1G, so you still slow down quite a lot.

That means you start braking at a different place - you have to brake later than before or you'll slow down too much.

So the trick is to know how much later you have to brake depending on where you lifted.

You're trying to get that to the optimum so you're not locking the brakes, and so you're losing as little time as possible with the lift and coast technique. That is the challenge and it is not easy.

It has a knock-on effect on how you set the car up, too, because its behaviour changes between qualifying and race day.

In qualifying, you are stabbing the brakes, getting the car to move and pitch when you're in the braking zone. It's right on the nose into the apex of the corner.

But when you lift and coast, it feels different. You are trying to be on the limit. But it is like doing it handicapped, so it's really difficult.

You're still pushing, but when you hit the brakes the weight transfer is different, and it changes the way the car behaves going into the corner. The balance shifts.

All in all, racing with lift and coast is actually harder.

On the limit in qualifying

The cars are very different to drive in qualifying this year, too.

Last year's V8 engines had very little torque, so we were always as high in the rev band as possible.

This year, the torque is much lower in the rev band and there is so much more of it. We also have a lot less downforce.

That means we use the engines very differently - we rev them much less, and we change gears much sooner, so at the same point on the track we're often in a higher gear than last year.

This is called short-shifting, and it allows you better control of the torque of the engine.

If we had as much downforce as last year, we would not have to short-shift as much. But we have lost a lot of grip, especially at the rear, with the restrictions on aerodynamics.

It's really difficult to put into words exactly how you judge when you need to short-shift, because it's all done on feel.

From experience, you know where the car's limitations are, you know where it breaks traction, you know if you go aggressively on the throttle, or past a certain percentage, that you're going to break traction in first, second and third gear.

Your mind sets those limits and you're always trying to push them.

You want to pull out of the corner with a little bit of slip, but not so much it unsettles the car. Getting that exactly right is what makes us good drivers.

On the big noise debate

Since I started driving in F1 in 2006-07, the cars have got slower and easier to drive.

In 2007, we had more downforce, the speed through corners was faster, the races were a series of sprints between fuel stops.

Now, it's still very physical, but for someone who trains a lot, like all the drivers do, it's nowhere near as demanding. We all say, "that race was easy", or "it's easy to drive the car now".

It's all relative, of course. You still have to be very fit - if a normal person got in the car, it would destroy them.

Are the new V6 turbo hybrid engines 'too quiet'?

They still sound like racing cars, despite what Bernie Ecclestone says. And instead of the monotone, ear-splitting scream of the old naturally aspirated V8s, the new V6 turbo hybrids have a multi-dimensional tone.

But while we're not as stretched physically, don't think we're not on the limit. Whatever I drive, I will push to the limit.

This year, I am pushed more in the technical sense, in terms of the need to understand the car and all the things to optimise it, but I am still on the edge of what's humanly possible.

As for the criticisms of the sound of the new engines, it is what it is.

Every year, things change. The V10s from the early 2000s sounded better than the V8s which F1 used from 2006-13. Then we got used to the V8s and now we have gone to the turbo. It still sounds good.

When I first came to an F1 race, the first thing I noticed was the noise vibrated my chest. I was 11 years old and it nearly burst my ear drums, and that excited me so much.

But people watching on TV don't get that - even if they have the very best sound system. You only get that at the track.

Now, they won't have that. But the races still look cool.

Some people will say they just want the loudest cars they can have, but we also have to think of the wider world and F1 is now at the forefront of developing great engines with lots of power but excellent fuel consumption.

What we have been able to achieve with these engines is incredible - we get the same power, if not more, out of a V6 than a V8 and use 30% less fuel. That's fantastic. And the new era of road cars will benefit.

F1 has always been about pushing technical boundaries, and that's what we're doing with these new engines.

Malaysian Grand Prix on the BBC

This weekend we're racing in Malaysia and it is a massively challenging grand prix.

It's incredible how warm it is here. That makes it one of the toughest races for the driver and the car. I really enjoy it because of that, and because it's a really good track.

I have generally been at the front in the seven races I have done here so far, but I have not yet won.

That's what I'm here to do. I just hope I've left all my bad luck back in Australia.