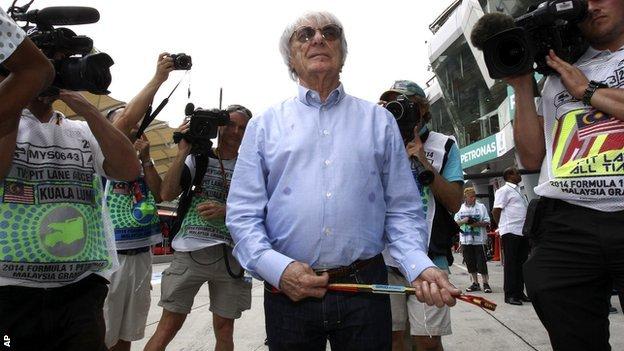 Formula 1 boss Bernie Ecclestone has admitted he was too critical of the sound produced by the new engines introduced this year.

The 83-year-old said after the season-opener in Australia two weeks ago that he was "horrified" by the quieter sound of the new turbo hybrid engines.

But after hearing them at a track for the first time in Malaysia, he admitted they were "better than I thought".

He said he had been told by the teams the engines could not be made louder.

"You'll have to ask the engineers. I've asked them and they've said no," he said.

But he said he still felt there was a potential problem with race promoters and fans.

Are the new V6 turbo hybrid engines 'too quiet'?

They still sound like racing cars, despite what Bernie Ecclestone says. And instead of the monotone, ear-splitting scream of the old naturally aspirated V8s, the new V6 turbo hybrids have a multi-dimensional tone.

"People buy F1 and when they get what we've got at the moment they don't think it's F1," he said.

F1 has introduced the new V6 turbo engines this year after the teams and car manufacturers involved in the sport concluded that it needed to keep up with the road-car industry.

The new engines feature extensive energy-recovery - or hybrid - systems and are governed by a fuel restriction.

Ecclestone has been opposed to the new engines from the very beginning, but failed in his attempts to get the rule change reversed, although he did manage to delay its introduction by a year and force the engines to have six cylinders rather than four.

Supporters of the new engines point out that F1 was losing its appeal to manufacturers because the former 2.4-litre V8s no longer had relevance to the development of road cars.

Manufacturers say developing the new engines to the fuel-restriction formula will have a direct impact on road-car technology.

Adopting the engines ensured Renault stayed in the sport when it would otherwise have quit and has attracted Honda back from 2015.

The new engines produce a quieter sound for a number of reasons.

Turbo engines are by their nature quieter than naturally-aspirated ones because the turbo takes energy out of the exhaust flow to produce more power from the engine.

Exhaust pipes have a wide aperture to ensure there is no back pressure in the turbo.

The new F1 engines also have a motor-generator unit attached to the turbo to regenerate some of the energy that would otherwise be wasted.

The fuel-flow restriction means drivers cannot rev the engines to the maximum allowed 15,000rpm because they will use too much fuel. And the increased torque and wider torque band means they do not need to use all the revs for best performance.

Engineers say the fuel-flow limit cannot be abandoned because it would lead development down a path that was not relevant to road cars.