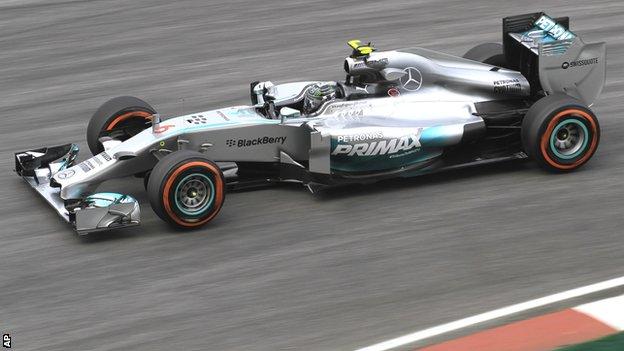 The silver cars were a second a lap clear of the field as Rosberg beat Hamilton by 0.232 seconds.

Vettel's team-mate Daniel Ricciardo was sixth ahead of Ferrari's Fernando Alonso, who appears to be struggling at the demanding Sepang track.

Qualifying for the second race of the season starts at 08:00 GMT and pole looks set to be a private fight between the Mercedes drivers.

Rosberg's fastest lap of one minute 39.008 seconds was 1.148secs clear of Raikkonen in third place. Hamilton made an error on his first lap on the faster 'medium' tyre, when it is at its fastest, and set his best time on the second lap.

At Ferrari, Raikkonen has had an advantage over Alonso so far at Sepang - the Finn was 0.580secs ahead of his team-mate.

That is the opposite situation to that at the first race of the season in Australia two weeks ago, where Raikkonen was uncomfortable with the car.

The Spaniard appears to be struggling particularly in the first sector of the lap. He set his fastest time there on his second flying lap on the medium tyres, which was just 0.1secs slower than his fastest when normally the tyres would be expected to lose close to half a second.

Williams were not as impressive as they had been in Australia, with Felipe Massa and Valtteri Bottas in eighth and ninth places ahead of Sergio Perez's Force India - the Mexican 0.6secs slower than team-mate Hulkenberg.

Toro Rosso's Russian novice Daniil Kvyat was 11th, ahead of team-mate Jean-Eric Vergne and the Saubers of Adrian Sutil and Esteban Gutierrez.

McLaren had a difficult session, with both cars stuck in the garage as a result of sensor problems that forced the cars into 'limp-home mode'.

Danish rookie Kevin Magnussen, the star of Australia with his second place finish, failed even to set a time. Team-mate Jenson Button only a very slow, stuttering one and was 21st, 25 seconds off the pace.

Lotus continued to struggle. Drivers Romain Grosjean and Pastor Maldonado, who had almost no running on Friday, did at least manage to complete a full programme of laps, but were down in 16th and 17th places nearly three seconds off the pace.

Grosjean complained that the car had no rear grip. The team made a late start to their preparations for 2014 as a result of budgetary problems last year and are still trying to make up for lost time.