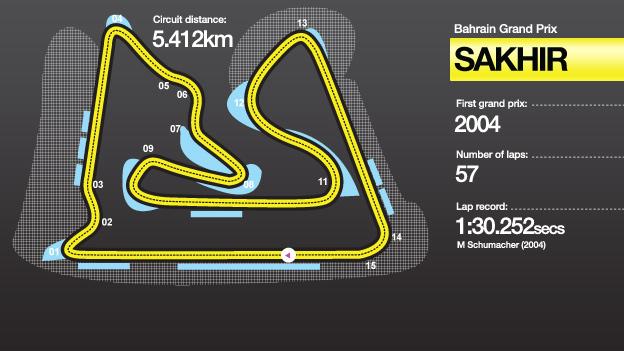 Mercedes arrive in the Middle East for Sunday's Bahrain Grand Prix with a third successive victory on their radar, as they look to press home their early season performance advantage.

The first Bahrain Grand Prix took place in 2004 and was dominated by Michael Schumacher and Ferrari. The seven-time world champion won from pole and set fastest lap.

Rosberg retains his championship lead on 43 points with Hamilton slotting into second, 18 points adrift heading to the desert track.

Hamilton, who retired in Australia with an engine problem, said: "We know that we have to make these early races pay. Anything can happen, as we saw in Australia."

Reasons to watch the Bahrain GP

Hamilton bids to break Jim Clark's British all-time pole record, Rosberg attempts to wrestle back the initiative at Mercedes and Lotus aim simply to get two cars to the chequered flag.

Daniel Ricciardo will try to steer clear of the stewards' office, Felipe Massa makes his next move after ignoring team orders and Sebastian Vettel targets his third straight win in the Bahraini desert, as the race is run for the first time at night.

Mercedes go for their third successive victory for only the second time in history, the paddock awaits its next celebrity podium interviewer following Benedict 'Sherlock' Cumberbatch's turn in Malaysia and you get a lie-in because the lights don't go out until 16:00 BST.

What makes the Bahrain GP different?

Bahrain marks its 10th anniversary as a grand prix venue with a new approach in 2014 by holding a night race for the first time.

The move follows the lead of Singapore, which has established itself as one of Formula 1's most popular races since making its debut in 2008.

Whether the same will happen in Bahrain seems unlikely, however, for Singapore's appeal extends far beyond the event happening under lights.

By contrast, the Sakhir track out in the desert south of Bahrain's capital Manama has little to recommend it, either as a challenge for the drivers or in excitement for spectators.

And while the paddock is a pleasant oasis of tranquillity, complete with palm trees draped in fairy lights, the ongoing civil unrest in the Gulf state provides an uncomfortable back drop to a race that is, whether the authorities like it or not, unavoidably tied up in it, one way or another.

The track on which the 22 drivers will compete on is made up of crushed rock - called Greywacke aggregate - from a quarry in Shropshire, no less. What with this being the desert, sand blowing onto the track can be an issue. To try to alleviate this problem, organisers have sprayed glue on to the sand around the track.

Since hosting its debut F1 weekend in 2004, the venue has produced few entertaining races. The 5.412km circuit features a host of long straights and slow-speed corners, which is hard on the brakes and should encourage overtaking - but that is very rarely the case. And the acres of run-off mean that mistakes are not punished.

The Bahrain International Circuit (BIC) is located 30km south of capital city Manama and features modern facilities with a favourable paddock that creates a friendly and sociable atmosphere. Celebrity spots are rare, but this year Indian cricket legend Sachin Tendulkar is expected to be in attendance.

It was 22 April 2012. Sebastian Vettel, the world champion at the time, had arrived in Bahrain in the unusual position of not having won a grand prix in three attempts that season. The German had not scored a pole position either, having taken 15 of 19 the previous year.

In Bahrain, that all changed - but he had to work for it. Vettel stormed to pole and then pulled away from the pack in the race and looked comfortable. But behind, Kimi Raikkonen in the Lotus was charging. The Finn was judging his rise from 11th on the grid to perfection.

After just 10 laps, he was up to third, behind Vettel and team-mate Romain Grosjean. He overtook Grosjean on lap 24 with ease and then caught and pressured Vettel in a way the reigning world champion had not experienced for some time. But Vettel defended brilliantly. They pitted for the final time together and, as Vettel emerged in front following another lightning-quick stop by his Red Bull team, the German eased away.

There's coverage across the BBC this weekend led by F1 Correspondent James Allen, with ex-F1 driver Allan McNish alongside him in the commentary box and Jennie Gow reporting from the pit lane. There will also be live text commentary on the BBC Sport website for all sessions.