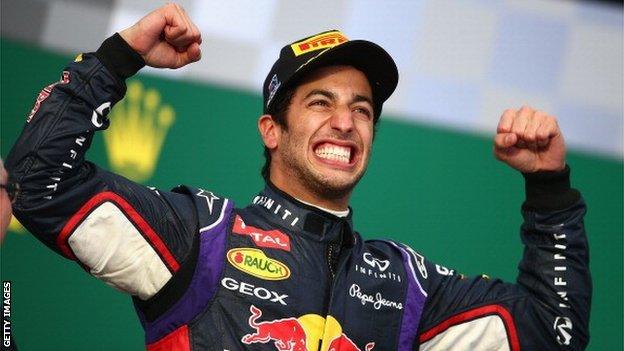 Red Bull's Daniel Ricciardo was disqualified from second place for exceeding the fuel-flow limit during the race on 16 March.

The team say they ignored the official demands to use less fuel as a sensor was faulty. Officials say it was not.

McLaren racing director Eric Boullier said it was "out of the question" to ignore instructions from rule-makers.

The Frenchman is the first opposing team boss to offer an opinion on the case, which is due to be heard by governing body the FIA's appeal court on 14 April.

Red Bull's argument is that they ignored the readings from the official sensor, and warnings from race control to abide by it, because the sensor was giving faulty readings. They insist they can prove the car never exceeded the maximum fuel-flow limit of 100kg/hour.

Team principal Christian Horner said: "The amount of fuel delivered did not exceed the regulatory amount, so we're entirely confident we have a very strong case and we have a fuel sensor that is erroneous.

"We were racing, we were pushing hard. You're faced with a decision. Do you believe a sensor that's reading an erroneous number and turn your engine down and concede the position you're fighting for or do you go by the regulations and that's what we did."

Horner argues that the rules do not say explicitly that the teams have to use the official sensor to measure the fuel-flow rate - only that they have to comply with that rate. He has even suggested abandoning the fuel-flow measurement and using only the requirement to use no more than 100kg of fuel for a race.

But Boullier said: "We have been told to use it, so we use it. No debate.

"When you have two systems to measure your fuel flow, there will always be discrepancy between them.

"If you find an interest in using system A because you find more performance, I understand you may choose this way.

"But if in a regulated championship you are told to use B, [it's] out of the question [not to]. We have to respect the fuel flow so we have to have a system to measure it.

"The FIA went with the sensors and we have to respect it. Whether we change the way we measure the fuel flow is another debate."

"Article 5.10 makes it quite clear in my view that the only way the fuel flow will be measured is with the homologated [officially approved] sensor," Whiting said.

"As you know, Gill is the only sensor that is homologated by the FIA. To me it is perfectly clear."

Whiting was referring to article 5.10.3, which states: "Homologated sensors must be fitted which directly measure the pressure, the temperature and the flow of the fuel supplied to the injectors. These signals must be supplied to the FIA data logger."

Red Bull had further problems with sensors in Malaysia at the weekend.

The sensor in Ricciardo's car failed before the race, and the car used readings from the engine instead. The Australian was then forced to retire after 49 laps.

"It clearly demonstrates there are issues with the sensors," he said, although he admitted: "Everybody else is very happy with the sensor, apparently."

The FIA insists the fuel-flow restriction is at the heart of the new F1 rules, that the engines have been designed with that in mind and that abandoning it would lead to "very dangerous" differences between the speed of cars on any particular lap.