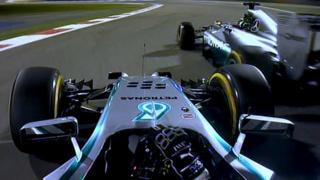 BBC Sport looks back to the "wonderful" wheel-to-wheel racing between Mercedes drivers Lewis Hamilton and Nico Rosberg at the 2014 Bahrain Grand Prix, as the pair look set to fight on the desert track again.

Having taken the lead at the first corner, Hamilton was forced to defend aggressively and the cars came close to colliding on a number of occasions.

Despite instructions on team radio from Mercedes technical director Paddy Lowe "to make sure we bring both cars home" the duo battled until the chequered flag, as the British driver emerged victorious.