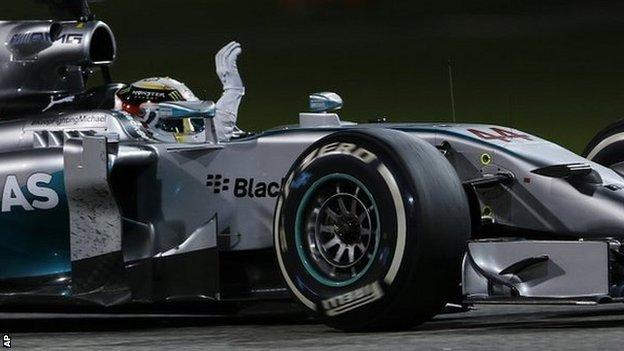 Mercedes says it would probably have quit Formula 1 if the sport had not adopted its new turbo hybrid engines.

Professor Dr Thomas Weber, the Daimler board member responsible for research and development, said the engines provided the justification to continue.

"The key challenge for the future is fuel economy and efficiency and, with the change in regulations, F1 is the spearhead for development," Weber said.

He said it had become "hard to explain" why F1 was using the old V8 engines.

The sport switched this year to 1.6-litre turbo hybrid engines, replacing naturally aspirated V8s. Mercedes have dominated so far, with Lewis Hamilton winning two of the first three races and team-mate Nico Rosberg the other.

Efficiency is at the heart of the new F1, with a limited fuel allowance and a maximum fuel-flow rate.

Renault - one of F1's two other car manufacturers - threatened to quit if the sport did not adopt the new engines, because the old V8s were no longer relevant to road-car development.

Now Mercedes has revealed it would also probably have stopped if F1 had not decided to commit to the efficiency formula in 2009, around the time BMW and Toyota left the sport.

"I think so, yeah," Weber told BBC Sport. "Because we had the discussion."

"We had at different times the challenge to discuss F1 with the [Daimler] supervisory board," he added.

"We had hard discussions. And it was always - and even more so when it came to the later years - harder to explain why we were using naturally aspirated engines.

"Now with these new regulations I can clearly convince the supervisory board that the [F1 team] are doing exactly what we need - downsizing, direct injection, lightweight construction, fuel efficiency on the highest possible level, new technologies and combining a combustion engine with an e-motor hybrid."

Weber rejected the criticisms that have been levelled at the new rules by powerful figures such as F1 commercial rights holder Bernie Ecclestone and Ferrari president Luca Di Montezmolo.

Weber said it was a "stupid discussion" to claim that the fuel-flow restriction was too complicated for the audience to understand, saying it was merely a "communication issue" and pointing to the complexities of modern road cars.

And while he accepted the decision for F1 to "look at" whether it was possible to make the new engines louder, he added: "We can demonstrate to the public that it is still emotional, even if the noise level is a little bit quieter.

"Of course we can look if there is a little bit more possible. But in the meantime all the road cars are going for turbos, downsizing, so even a Porsche now sounds similar. So people learn it. That's easy."

He said technology transfer to road cars from the new F1 engines, with their dual energy recovery systems, was already happening and he hailed the "incredible" achievement of all the engine designers in F1.

The new F1 engines have a thermal efficiency of "40% and above" - better than that of a road-going diesel.

"Never before did we do such a huge step forward in such a small space of time from a V8 naturally aspirated engine to downsizing, turbocharged, all the technologies with one step," Weber said.

"It was the biggest challenge ever."