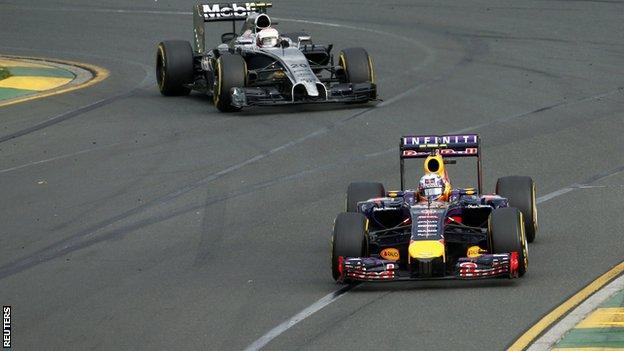 McLaren and Red Bull are in a legal tussle over the future of aerodynamics expert Dan Fallows.

Red Bull announced on Wednesday that Fallows had rejoined them in the role of head of aerodynamics, replacing McLaren-bound Peter Prodromou.

In January, McLaren said Fallows had joined from Red Bull, and racing director Eric Boullier said he had a "legally-binding contract".

"The matter is now in the hands of our lawyers," he added.

BBC Sport has learned that after Fallows agreed his deal with McLaren, Red Bull offered him a better job title and a higher salary.

Although Fallows has signed a contract with McLaren, he had not actually started work for the team. He had been on gardening leave from Red Bull, where he is now back at work in his new role.

A Red Bull statement said Fallows "left the team for a short time last year and has returned to begin working in his new role".

The team added Prodromou, who worked closely with their design chief Adrian Newey, is now on "gardening leave". He will join McLaren ahead of the 2015 season.

Prodromou was previously with McLaren from 1991 until moving to Red Bull with Newey in 2006.