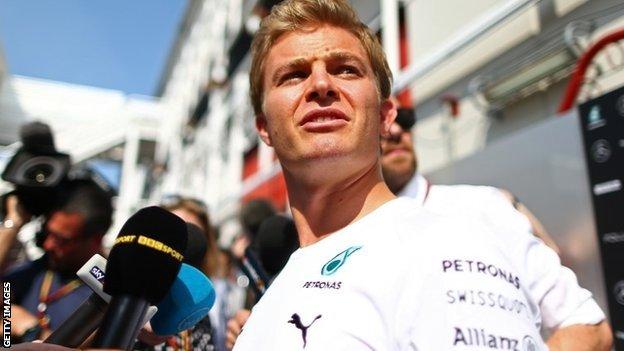 Hamilton has triumphed in all three races since retiring from the season-opener in Australia, which Rosberg won.

Rosberg said: "Every weekend is crucial but the results momentum is on his side and I need to try to turn it around.

"Definitely that is the case. I have come here to win, to try to extend the lead in the championship."

Lewis Hamilton has completed 169 racing laps out of a possible 224 this year (following his retirement from the Australian GP). Of those, he has spent 164 in the lead (97%).

Hamilton is four points behind his team-mate in the drivers' standings and the Mercedes car has such a performance advantage that the two are effectively competing for wins only with each other at every race.

Hamilton said: "This is a much more intense season so far and perfection is required every weekend to get that result, especially when you have a good team-mate who is also doing an exceptional job."

Hamilton has out-qualified Rosberg in three of the four races so far this season, each time when there was a wet qualifying session.

Rosberg said: "What I need is a normal weekend and then I'm sure I'll be able to turn things around."

Both men said they expected the nature of Barcelona's Circuit de Catalunya could mean they face a tougher challenge from their rivals than has been the case so far.

Long, demanding corners predominate at the track, which is renowned as one of the severest tests of a car's aerodynamic capabilities on the Formula 1 calendar.

The competitive order may also shift as Barcelona is a race where teams traditionally bring their first big upgrade package of the year.

Hamilton said: "It depends what step they make but the Red Bulls are at the back of my mind.

"They have perhaps a little more downforce than us, they just don't have as much power.

"This is very much a downforce-dependent circuit, so you'll get a real good indication of how good their car is."

Alonso finished third in the last race in China after a troubled start to the season for Ferrari, but said he would not start the weekend of his home race expecting to repeat that result.

"We will do our best but we know it will be a tough weekend. Today, sitting here, if I tell you I will fight for the podium, I would lie to you and I don't want to do that for all the people coming," said the 32-year-old, a hero for the tens of thousands of Spanish fans who flock to the race.

Four-time champion Vettel, who has been beaten by team-mate Daniel Ricciardo in the last two races and is struggling to adapt to the new Red Bull, said: "Mercedes are in a very strong position. They are difficult to beat, but it's never impossible.

"At the moment there are a couple of things we need to get on top of and then it should be a different story."