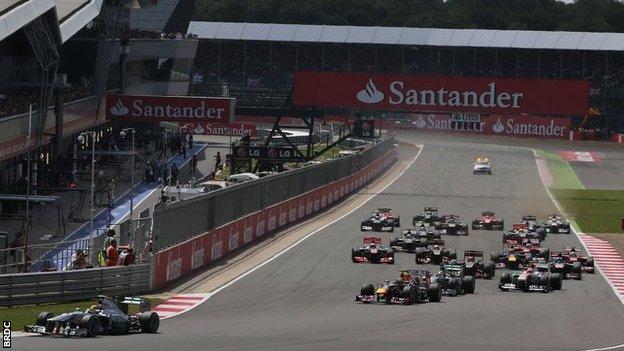 Silverstone's 50th anniversary as a Formula 1 venue shows it has kept pace with the sport over the eras, says BRDC president Derek Warwick.

When it hosts July's British Grand Prix, it will be only the third venue, after Monaco's Monte Carlo and Italy's Monza, to host at least 50 races.

Silverstone has faced the axe in the past because of funding issues, but in 2009 signed a new 17-year deal.

"Silverstone is the home of motor racing," said Warwick.

"The 50th anniversary proves that through all the different eras, we have kept up with the times."

Silverstone first hosted the British Grand Prix in 1948 but has consistently come under pressure over the years to upgrade its aging facilities.

The circuit is owned by the BRDC and receives no government funding and has struggled to compete with new multi-million pound, government-backed circuits such as China and Bahrain.

It lost the British Grand Prix rights to Donington Park in 2008, but regained them when the circuit failed to deliver, signing a new long-term deal.

That long-term security led to investment which allowed circuit development, including a new pit and paddock complex.

To celebrate the 50th anniversary, the pit lane will be opened up to fans for free on the Thursday before the race on 6 July.

Warwick says the cars will be on display and added that F1 boss Bernie Ecclestone says he will "push some drivers out to meet the fans".