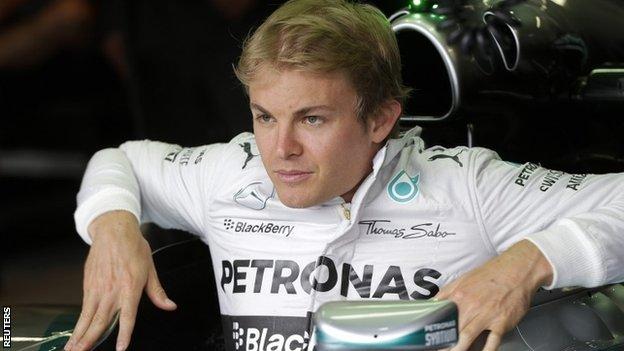 Nico Rosberg is to remain at Mercedes alongside Lewis Hamilton after signing a contract extension for at least two more years.

The 28-year-old's current deal was due to expire at the end of this campaign.

A Mercedes spokesman said: "We have long-term relationships with both our drivers."

The German driver, who won the opening race of 2014, is second in the standings, behind Hamilton, who is in the second season of a three-year deal.

News of Rosberg's deal follows comments this week from Dieter Zetsche, the chairman of Mercedes-Benz Cars, that Ferrari's Fernando Alonso was "maybe the best driver in F1".

Zetsche's remarks, made during a visit to a Mercedes car factory in Spain, led some in F1 to wonder whether Mercedes might consider signing Alonso in the future.

But the Brackley-based outfit are happy with their current line-up and have no intention of breaking it up for the foreseeable future.

Mercedes bosses also point out that, during his trip to the car factory, Zetsche stated he felt his team had the best driver line-up in F1 but that this was not reported by the media.

Although Alonso, a double world champion, is widely admired as arguably the most complete driver in F1, many senior figures consider that he is difficult to work with and a potentially disruptive influence in a team.

Alonso's relationship with Ferrari has been going through a strained period because of their failure to win the World Championship following the 32-year-old Spaniard's transfer from Renault in 2010.

Mercedes have won every race in Formula 1 this season after producing a dominant car under the new rules that have introduced turbo-hybrid engines and a fuel-efficiency based set of regulations to the sport.

Hamilton has won four races to Rosberg's one, but they are only separated by three points going into this weekend's race in Monaco.

Reacting to the news, BBC F1 co-commentator David Coulthard told BBC Radio 5 live: "Nico's being rewarded for not only helping build the stability in the team over the last couple of seasons but also it gives him a platform to really have a clear head and take this World Championship battle head to head with his team-mate."

However, Coulthard believes Hamilton remains the team's number one driver. He explained: "The reality is you can only have one of your drivers standing on the top spot of the podium.

"Lewis Hamilton has been brought in as a former world champion, as the one that they would have expected to really be leading the charge for another championship.

"No disrespect to Nico but we've seen Lewis and Fernando go head to head before at McLaren and it didn't work.

"We've seen Ayrton Senna and Alain Prost within a team together as well and that didn't work.

"Ideally you have two number ones but there's always going to be one of them that's slightly stronger."