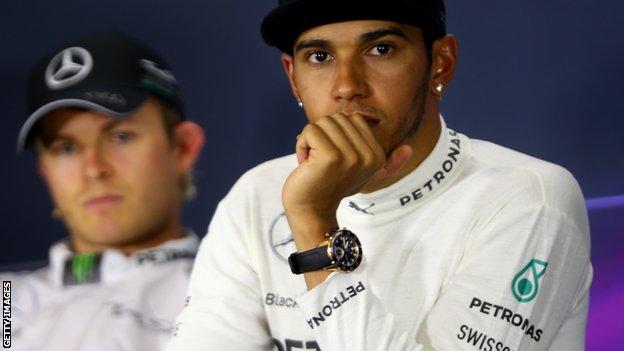 Britain's Lewis Hamilton says he has greater desire to win this year's world title than team-mate Nico Rosberg because of his tougher upbringing.

The Mercedes drivers have won all five races so far this season, with Hamilton leading Rosberg by three points.

"I come from a not great place in Stevenage and lived on a couch in my dad's apartment," said Hamilton, 29.

"Nico grew up in Monaco with jets and boats and all these kind of things - so the hunger is different."

Hamilton, whose parents split up when he was young, grew up on a council estate in Hertfordshire while his team-mate is the son of the 1982 F1 world champion Keke Rosberg.

Hamilton, speaking to formula1.com, added: "I want to be the hungriest guy in the cockpit from all 22 of us - even if every driver has to believe that he's the hungriest - because if I were to come here believing that Nico is hungrier than me then I might as well go home.

"To win the world championship, you need to be the hungriest."

Rosberg believes he needs to beat Hamilton in Monaco this weekend to stem the momentum the Englishman has built up from winning four consecutive races.

The German won the season-opening race in Australia, from which Hamilton retired with an engine problem.

But Hamilton said: "It is all about grabbing the opportunity when you have it.

"I would have never dreamed of having a car as good as I have now - so I will use it to my best advantage.

"But I have a team-mate who is pushing me to the limit. Fortunately, for the moment, that's not so bad - because I am not so bad on the limit."