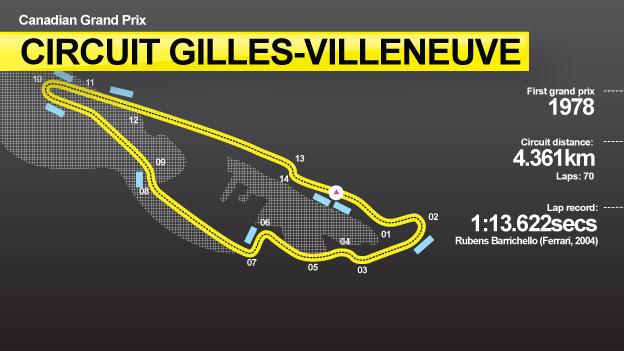 As the Mercedes inter-team rivalry intensifies, the Formula 1 World Championship heads across the Atlantic for this weekend's Canadian Grand Prix.

Britain's Lewis Hamilton says he and team-mate Nico Rosberg are still friends after the controversial qualifying incident in Monaco.

Rosberg went on to claim victory on the streets of Monte Carlo and snatch the lead in the drivers' standings back from the Briton.

Hamilton, though, will want to hit back immediately, starting with victory on the Circuit Gilles Villeneuve - a track where he has won three times in six attempts.

Reasons to watch the Canadian GP

Hamilton and Rosberg will renew their battle for pole, the first corner and the race win following an intense Monaco Grand Prix victory.

Mercedes target their seventh successive win, while reigning world champion Sebastian Vettel will simply hope for a Red Bull car that does not break down.

McLaren will hope to end a run of 25 races, stretching back to the 2012 Brazilian Grand Prix, without a win.

What makes the Canadian GP different?

Monaco's tight and twisty streets will be a distant memory as the Gilles Villeneuve offers a change of pace with its long straights, where cars hit 300kph, followed by tight corners.

As a result, the race is hard on the brakes, but the layout lends itself to overtaking - and lots of it.

The high-speed nature of the 4.361km track will play into the hands of the Mercedes-powered cars who have a significant power advantage over their rivals.

The venue, located on the Ile Notre Dame man-made island set against the backdrop of Montreal, is perhaps most famous for the Wall of Champions.

The concrete wall, located in the final chicane, is so called because a number of world champions, including Damon Hill, Jacques Villeneuve and Michael Schumacher, have crashed into it.

Montreal really embraces Formula 1, with 100,000 fans attending each year to throw their support behind the drivers and create a party-like atmosphere.

"From one of the great Formula 1 venues to another. The grand prix circus heads to Canada this weekend for a race on a second street circuit in a row, but a very different one from Monaco.

"Montreal's Circuit Gilles Villeneuve is, like Monaco, surrounded by unforgiving walls ready to catch out drivers who make the slightest mistake. But the similarities stop there.

"Monaco is a claustrophobic place, the track hemmed in by the city and cliffs around it. Montreal's race is held on an island in the middle of the forbidding St Lawrence Seaway and under big North American skies. And unlike Monaco, its dominant characteristics are long straights and hard braking.

"The fans are enthusiastic and knowledgeable, and throng the Ile Notre Dame throughout the weekend. The action on the track is usually fast and furious - Canada has a history of producing great races.

"On top of that, Montreal is a vibrant, exciting city that provides something for everyone in the evenings. Canada is, in short, one of the highlights of the season."

Lewis Hamilton will have fond memories of the Canadian Grand Prix - it was the race where he first stood on top of a Formula 1 podium at only the sixth attempt.

Arriving in Montreal in 2007, Hamilton was in good form having secured five successive podiums in as many races during his debut season.

The Briton, then 22, made a textbook getaway from pole position and went on to survive four safety car interventions to clinch victory ahead of BMW Sauber's Nick Heidfeld and Williams' Alexander Wurz.

His then McLaren team-mate Fernando Alonso finished down in seventh, while Robert Kubica survived a huge 180mph crash, in which his BMW rolled over just before the hairpin.

Kubica touched Jarno Trulli's Toyota as they approached the hairpin and ricocheted off track. The car launched into the air, flew into the barriers and flipped before coming to a stop on its side.

The Pole, who went on to win the race the next year, was taken to the hospital and missed the next race in the United States as a precaution following light concussion and a sprained ankle. The man who replaced him for that race was a young Sebastian Vettel making his debut.

Victory gave Hamilton an eight-point lead in the drivers' championship. A similar success this year - which would be his fourth in Canada - will see him reclaim the top stop in the 2014 world championship.