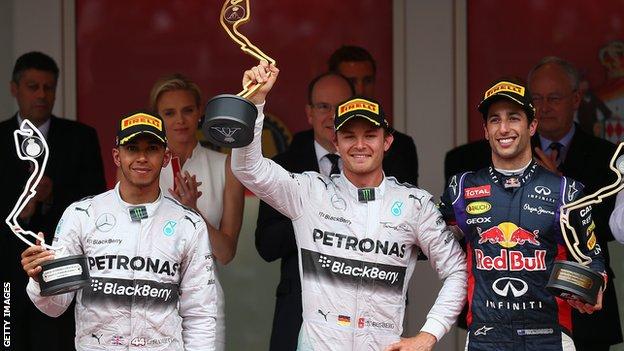 Lewis Hamilton says he and Mercedes team-mate Nico Rosberg have made their peace following their fall-out at the Monaco Grand Prix.

Hamilton believed Rosberg deliberately left the track in qualifying to deny him the chance of claiming pole for the race. Rosberg went on to win.

But Hamilton used his Twitter account to say all is well between the pair ahead of the Canadian Grand Prix.

Hamilton also said: "We've been friends a long time. As friends we have our ups and downs."

The controversy at Monaco last weekend followed an incident in final qualifying when Rosberg ran into the escape road at the Mirabeau corner.

Hamilton, who was behind him on the track, had to slow down because of yellow caution flags, preventing him from trying to post the fastest time.

Rosberg was cleared of an wrong-doing by the stewards and the German took full advantage of pole position to win a race on a circuit where it is notoriously difficult to overtake, going four points clear at the top of the drivers' standings.

Mercedes non-executive chairman Niki Lauda had said he would talk to Hamilton ahead of the next round in Canada on 8 June to try and ease any tensions.