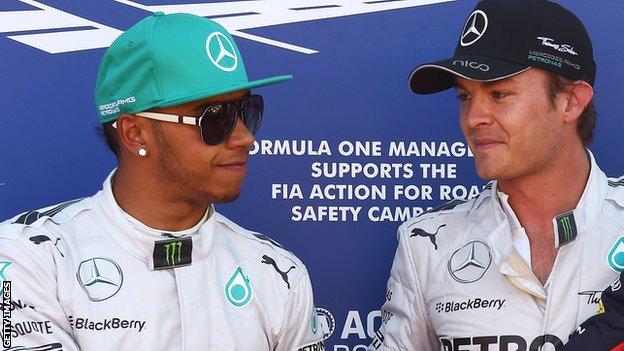 Lewis Hamilton and Nico Rosberg insist they can remain friends, despite their intense battle for the Formula 1 title.

The Mercedes team-mates had a fallout at the last race in Monaco, where Hamilton suspected Rosberg of gamesmanship.

The pair renew their rivalry in Canada this weekend, but Hamilton does not foresee any ongoing problems.

He said: "I've known Nico a long time so we've had a foundation of respect before any of the troubles in F1."

Hamilton believed Rosberg deliberately left the track in qualifying in Monaco to deny him the chance of claiming pole for the race, which the German went on to win.

Hamilton added: "It was a difficult weekend, but then you have to step back and realise there is a long way to go in the championship. At the end of the day, what matters is you're first at the end of the year, not in one race.

"Of course it raises tension in the team sometimes when you're fierce competitors, but the respect you have for one another is really important."

Rosberg agrees that the pair can still be friends.

"We have difficult periods but the base respect goes back 15 years," he said. "We discuss it and move on.

"It is more difficult fighting every single race weekend, only us. The opportunity is there to win the championship and that is the ultimate goal."

The two drivers joined the rest of the Mercedes team for a dinner in Montreal on Wednesday night.

Hamilton, 29, continued: "We are full steam ahead. We had dinner together with the team yesterday and things are better.

"We are going from strength to strength. People have ups and downs so it is no different from years we have been racing together.

"We move on. There is a long way to go and we are looking forward to that battle."

Rosberg, 28, leads Hamilton by four points heading into this weekend's race at the Circuit Gilles Villeneuve.

The German has won two races and finished second to Hamilton four times so far this season.

Hamilton retired from the season-opening Australian Grand Prix and then finished second to Rosberg in Monaco.