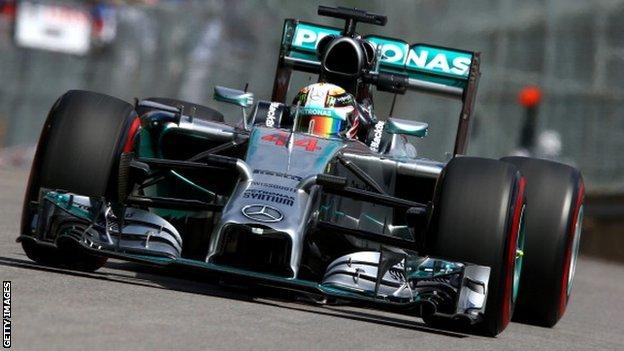 Hamilton was 0.476 seconds quicker than Massa and 0.51secs clear of team-mate and title rival Nico Rosberg in third.

Ferrari's Fernando Alonso was fourth, 0.878secs behind Hamilton, and ahead of Red Bull's Daniel Ricciardo and the second Ferrari of Kimi Raikkonen.

Williams' Valtteri Bottas was seventh, ahead of the Toro Rossos of Daniil Kvyat and Jean-Eric Vergne.

Hamilton and Rosberg were the only drivers not to improve their times on the theoretically faster of the two tyres, which suggests they may have even more in hand over their rivals than Hamilton's advantage suggests.

BBC F1 analyst Allan McNish said: "I think the Mercedes are ahead; whatever they're doing with the tyres they have a little in their pocket.

"The battle behind them is close, with Williams, Ferrari and I suspect one of the Red Bulls might be up there, too, although perhaps not both."

Williams are benefiting from the extra power of the Mercedes engine compared to Red Bull's Renault and the Ferrari unit.

Ricciardo challenged Hamilton for second place in the closing laps of the Monaco Grand Prix two weeks ago but the different characteristics of the Montreal track, with its long straights, means Red Bull are expecting a difficult weekend.

Red Bull team principal Christian Horner said: "I think Ferrari have made a step forward but so have Williams. We actually had Williams down as the fastest team on the race-simulation runs on Friday, so they could be a threat.

"But all the Mercedes teams look in good shape. If we can get on the third row, that's a realistic proposition for the afternoon for us."

McLaren, who also use a Mercedes engine, appeared to be struggling. Magnussen, who was nearly 0.4secs quicker than team-mate Jenson Button but 1.383secs slower than Hamilton, was asked by his engineer towards the end of the session whether it was worth trying to set a faster time. "There's no way we will improve," he said.

Typically for Montreal, the session was punctuated by off-track incidents.

Sauber driver Esteban Gutierrez managed only six laps before spinning at Turn Three and crashing into the wall on the entry to Turn Four. He will sit out of qualifying because the team will have to change the chassis.

Caterham's Marcus Ericsson had a spin at Turn Eight after locking his brakes and getting on to the grass on the approach.

The dirt he kicked on to the track caught out Force India's Sergio Perez, who spun at the same point shortly afterwards.

Vettel and Vergne were among those to miss their braking points and run wide at the chicane.