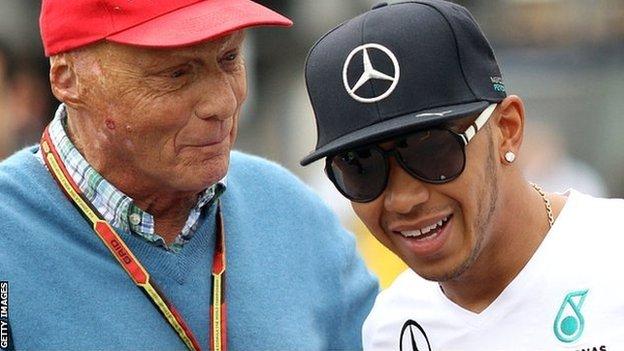 Lauda, non-executive chairman of Mercedes, believes losing the Austrian Grand Prix to Rosberg will make Hamilton more determined to do well at the next race, the British Grand Prix.

"He knows he has to fight hard with his team-mate to make up the points," said Lauda, a three-time world champion.

"He will be more motivated going to Silverstone after this result."

Hamilton's hopes of beating Rosberg in Austria were dashed by two errors in qualifying that left him ninth on the grid.

He fought back to finish second behind his German team-mate, who extended his advantage in the championship to 29 points.

Hamilton was 25 points behind after retiring from the first race of the season in Australia, which Rosberg won, but caught up with four consecutive victories.

But Rosberg now has his biggest advantage of the year heading to the British Grand Prix, which takes place on 6 July, largely thanks to Hamilton's retirement from this month's Canadian Grand Prix.

Lauda admitted the Montreal race had been "a disaster" for Hamilton, who won the world championship in 2008.

But he dismissed suggestions the 29-year-old Englishman's mistakes in qualifying in Austria were due to the pressure of trying to close a gap for the second time this season.

"These things can happen," said the 65-year-old Austrian. "There is nothing wrong with this. I have known him for a long time and he is absolutely perfect in his head.

"He is highly motivated and that's it. Don't worry about it."

Lauda added he was not concerned that the intensity of the fight could lead to clashes between the two Mercedes drivers.

"They are pushing each other since day one in Melbourne," he said. "They are doing a perfect job. They are professionals. They don't hit each other and they pull the team forward. It couldn't be better."