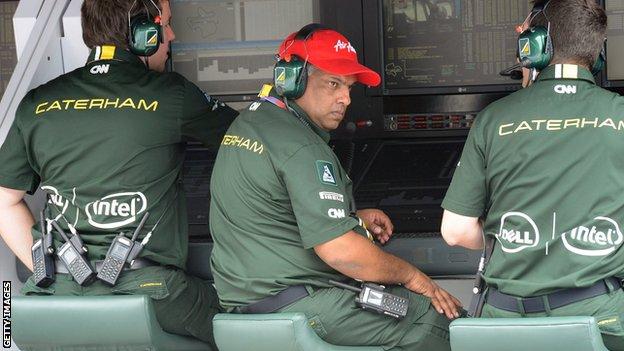 Caterham owner Tony Fernandes has hinted he is looking to quit Formula 1.

The Malaysian businessman, who entered the sport in 2010, said in closing his Twitter account on Friday: "F1 hasn't worked, but love Caterham Cars."

The struggling team, who finished last in 2013 and are again in that position this season, have held talks with potential investors and buyers.

They include former Midland, Spyker and HRT team boss Colin Kolles, who is trying to set up a Romanian F1 team.

Fernandes, who owns airline Air Asia and Premier League team Queens Park Rangers, entered F1 four years ago with what was then called Lotus Racing. The team's name was changed to Caterham in 2012 after Fernandes bought the manufacturer of lightweight sports cars.

He has plans to expand the Caterham Group, but had already said at the beginning of this season that if the F1 team did not improve their form it might be time to sell.

Caterham finished 10th in their first three seasons, guaranteeing a bigger slice of F1's prize fund, but slipped back behind back-of-the-grid rivals Marussia in 2013.

They again look set to finish 11th this year, which would reduce the prize money any new owner gets in 2015 by several million pounds.