Wolff is the first woman to take part in a grand prix weekend in 22 years but an engine problem forced the Briton to stop on lap two of her first run.

Nico Rosberg was fastest, ahead of Mercedes team-mate Lewis Hamilton.

Williams, one of the teams battling for honours behind the dominant Mercedes, managed to repair both cars for the second practice session, in which Lewis Hamilton beat Nico Rosberg despite suffering engine trouble.

Hamilton has not won at Silverstone since 2008, when he dominated in wet conditions to take one of the greatest victories of his career.

Married to Toto Wolff, Mercedes director of motorsport, co-team principal at Mercedes F1 and a 10% shareholder in Williams

The flowing, fast Silverstone circuit and the huge crowds - the grandstands were packed as about 80,000 spectators attended on Friday, with 95,000 due for Saturday's qualifying and 120,000 for the race on Sunday - make the British Grand Prix a favourite amongst drivers.

Development driver Wolff admitted she was disappointed but said she had learned things she could take into her next appearance, at the German Grand Prix in two weeks' time.

"Really tough day but that's F1 sometimes," said the 31-year-old Scot, who was driving the car of Valtteri Bottas.

"We had an oil-pressure problem, which cut the engine off. The guys are looking at it and hopefully they can get it fixed."

She thanked the support she had received, adding: "Going out on the track was just the best feeling. When you put your helmet on, that's the best.

"I had a good feeling out there in the car. It turned out to be a very short run, but I have to keep my head up.

"I felt very ready for today. The team had done a fantastic job of preparing me.

"It was good to get that first run on an actual race weekend in the bag and I'll keep working towards Hockenheim knowing what I have to do and how the car will feel."

Massa lost control after running wide on the exit of the 130mph right-hander at Stowe, spinning across the track, smashing into the barrier and coming to rest in the pit-lane entry.

The session was stopped as the marshals cleared up the wreckage of the car, which was badly damaged on the left-hand side.

"I'm fine," said Massa. "I went a little bit of the outside of the kerb and it pushed me on the inside. A shame to start the day like this."

Asked how much damage there was to the car, the Brazilian said: "A lot."

Nothing from the 90-minute first session suggested anyone will be able to challenge Hamilton and Rosberg.

The German set the pace with a lap of one minute 35.424 seconds, a substantial 0.731secs clear of Hamilton, who at one stage was on the radio asking his engineer where he needed to make up time on his team-mate.

The Briton is 29 points behind Mercedes team-mate Nico Rosberg in this season's dramatic title race, despite having won more races. Hamilton has retired from two grands prix, whereas Rosberg has not finished outside of the top two so far.

The pair resume their battle in qualifying tomorrow, which is live on BBC Two, radio 5 live and online.

Vettel had a heart-in-mouth moment towards the end of the session.

He ran wide at the first corner, Abbey, a 160mph right-hander, but recovered without incident.

McLaren's Jenson Button, who is unhappy that chief executive officer Ron Dennis said this week he should "try harder", was seventh fastest, ahead of Russian Daniil Kvyat in his Toro Rosso and the second McLaren of Dane Kevin Magnussen. 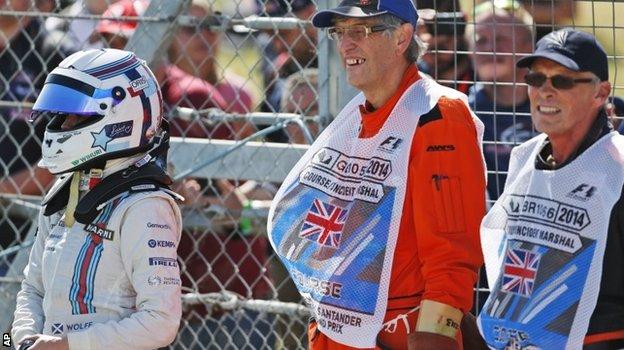