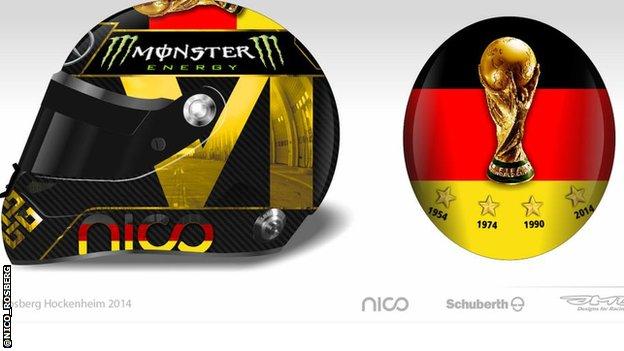 German Formula 1 driver Nico Rosberg has been forced to change the design of a helmet he planned to wear to celebrate his country's World Cup win.

The 29-year-old championship leader hoped to wear the helmet for his home grand prix at Hockenheim this weekend.

"I would have loved to carry the trophy as a tribute to the guys, but I respect the legal situation," he said.

Rosberg has opted to keep other emblems on his helmet, such as the national flag and four stars to represent four World Cup wins.

In a statement, Fifa said it was "obliged to take action against any unauthorised reproduction of its intellectual property in a commercial context".

It added: "We cannot allow a commercially branded helmet to feature the trophy as this would jeopardise the rights of our commercial affiliates.

"We appreciate Nico Rosberg's desire to congratulate the German team and have therefore been in discussions with the Rosberg team to attempt to find a solution, whereby he is still able to show his support for Germany without using Fifa intellectual property in a commercial context."

Rosberg, who leads his British team-mate Lewis Hamilton by four points, had proudly shown off the new helmet design on Tuesday.

"This will be my Hockenheim World Cup special edition helmet with the Fifa trophy," he tweeted.