Nico Rosberg was more than half a second quicker than team-mate Lewis Hamilton as Mercedes dominated final practice at the German Grand Prix.

The German posted a time 0.601 seconds clear of Hamilton, who lost time in the braking zones in the middle sector of the lap and with a tyre vibration.

Ferrari's Fernando Alonso was third, only 0.004secs down on Hamilton.

Williams' Felipe Massa was next, ahead of team-mate Valtteri Bottas and McLaren's Kevin Magnussen.

The Dane's team-mate Jenson Button was down in 13th, the Briton complaining about too much understeer, poor traction and problems with locking wheels during braking. 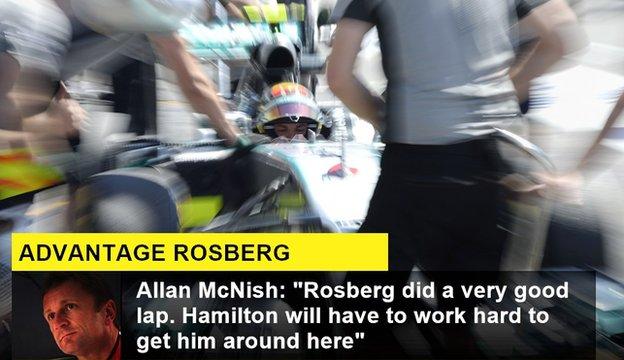 The Red Bulls of Daniel Ricciardo and Sebastian Vettel, who appeared to be able to match Mercedes' pace on Friday, were only seventh and ninth.

The Red Bulls were slower than Ricciardo had gone in setting third fastest time in Friday practice, which suggests the team may have been running quite a lot more fuel than their rivals in Saturday morning's session.

They sandwiched Ferrari's Kimi Raikkonen, who was 0.4secs slower than team-mate Alonso but had to do his qualifying simulation run on the super-soft tyres halfway through the session because of fuel pump problems.

Ferrari needed the extra time to change the part ahead of qualifying, which starts at 13:00 BST.

BBC F1 analyst Allan McNish said: "Rosberg did a very good lap. Hamilton will have to work hard to get him around here.

"After that, the scrap between Alonso, the two Williams and the two Red Bulls is going to be very tight.

"I would expect Bottas and Massa to be in it and the two Red Bulls to be much further up than they are."