Lewis Hamilton crashed in qualifying for the German Grand Prix and will start the race 15th with team-mate and title rival Nico Rosberg on pole.

The Mercedes driver lost control in the first knock-out session after a front-right brake failure at 130mph sent him smashing into the barriers.

Hamilton was able to walk away and was taken to the circuit's medical centre. 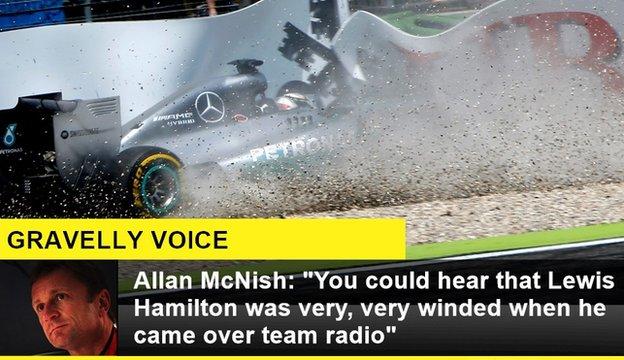 Mercedes said Hamilton was left "sore" after the crash, while Team boss Toto Wolff said the driver's knees "hurt a bit". Wolff added that the failed brake disc was a brand new piece of equipment.

Hamilton officially qualified 16th, but a penalty for Sauber's Esteban Gutierrez moved him up one place.

The crash happened as he entered the Sachskurve hairpin. Sounding shaken over the radio immediately afterwards, Hamilton said: "I hit the brakes and the brakes failed."

The result means Hamilton faces another afternoon of what he refers to as "damage limitation", seeking to prevent Rosberg building a big lead in the championship for the third time this season.

Hamilton is four points behind Rosberg after closing a 29-point deficit with victory in the British Grand Prix two weeks ago at Silverstone, where the German retired.

"It's great," said Rosberg. "Home race and to be on pole is fantastic. I would have preferred if it was an open fight with Lewis."

Bottas said: "I really felt like I got everything out of the car today."

Behind Massa and Magnussen came the Red Bulls of Daniel Ricciardo and world champion Sebastian Vettel, and the Ferrari of Fernando Alonso.

Magnussen's team-mate Jenson Button could only manage 11th after lapping 0.327secs off the Dane in second qualifying, complaining of a poor balance.

Magnussen's result suggests a new rear wing he has used all weekend had made a significant difference to the car's performance. Button only received his on Saturday morning.

Ferrari's Kimi Raikkonen was 12th, 0.407secs off Alonso, who has now out-qualified the Finn eight times in 10 races this season.