The pair were split by 0.238 seconds ahead of a crucial race in their battle for the World Championship.

Hamilton is 14 points behind Rosberg after 10 races and keen to reduce that gap before F1's four-week summer break.

The Hungaroring is one of Hamilton's favourite tracks - he has won there four times in the past seven races.

McLaren's Jenson Button was ninth ahead of Williams's Felipe Massa, who had a spin at the chicane after losing the rear of the car during braking.

Hamilton looked in strong form all day. He and Rosberg swapped fastest times in the first session until Hamilton finally set a lap 0.183secs quicker than Rosberg could manage. 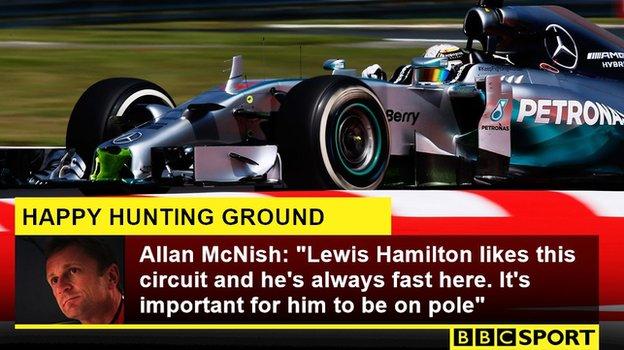 In the second session, Hamilton's superiority was clearer from the start.

On the first runs on the more durable medium tyres, Hamilton was 0.386secs quicker than Rosberg.

The margin was smaller on their qualifying simulation runs on the 'soft' tyre but Hamilton was still significantly ahead, and did two laps faster than Rosberg could manage and within 0.03secs of each other.

"We've got some work to do," said Hamilton. "I'm not fully comfortable with the car. I can't remember the grip levels feeling so poor for some time."

The initial salvos of the weekend took place in typically hot, sunny weather and, in contrast to Germany last weekend, in front of grandstands that were close to full.

On the race-simulation runs later in the session, Red Bull were closer to Mercedes than they have been in recent races, about half a second a lap down, according to BBC F1 analyst Allan McNish.

This was expected at a twisty track where their strong aerodynamics come to the fore and they are less penalised for the lack of power from their Renault engine.

At Ferrari, Raikkonen had been quicker than Alonso in the first session but normal service was resumed in the afternoon, with Alonso 0.296secs ahead of the Finn.

Williams looked less competitive than in the past three races, in each of which Bottas has finished on the podium. They have a new rear wing in Hungary that they hope will give the car more cornering performance.

BBC F1 analyst Allan McNish said: "Lewis Hamilton likes this circuit and he's always fast here. It's important for him to be on pole on Saturday.

"Mercedes are comfortable and there is nothing to choose between the drivers on race pace, and Red Bull are the next in line.

"The Ferrari of Alonso was going pretty quickly but a couple of tenths slower than the Red Bull, then the Force India of Sergio Perez, the McLarens and the Williams, who seem to have dropped back from their form in Germany."